Of course, leave it to the Family Research Council to put a lying spin on things. In case you don't recognize the "fear predictions," they were the same thing said by folks like FRC when DADT and DOMA were struck down: 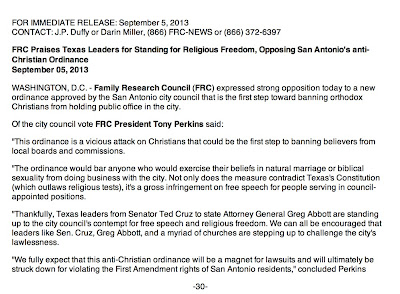 Hat tip to Jeremy Hooper
Posted by BlackTsunami at 3:35 PM No comments:

Report: Russian Lawmaker Proposes Taking Children From Gay Parents - And why should we be surprised. This is the end result that awful anti-gay law in Russia as well as the end result of spreading anti-gay propaganda.

Barber & Akers: Christians Are Now The Victims Of Don't Ask, Don't Tell - Of course this is a lie but that has never stopped the religious right before.
Posted by BlackTsunami at 9:14 AM No comments:

It was supposed to be a routine voting regarding a non-discrimination ordinance in San Antonio, TX. However, Fox News and members of the religious right were done spreading their lies and propaganda about lgbts, it got ugly. By the time some folks read this, the vote would have already happened, but from what I read on the twitter feed via some testimony from residents last night, it got really nasty. I can't tell you how many times the word "abomination" was used by folks testifying against the ordinance.

It all proves one thing - the lies of Anita Bryant aren't dead. They aren't some relic of the past. And they will continue to come and haunt the lgbt community until we make a concerted effort to meet these lies head on and beat them down BEFORE they are used against us in situations like this:

Opponents of proposed updates to the city's nondiscrimination ordinance implored the City Council on Wednesday to shift its support away from the measure while supporters rallied for Thursday's expected passage.

The scene repeated last week's demonstrations at City Hall, with a steady stream of speakers for and against controversial additions to the city's proposed ordinance that would add protections for sexual orientation, gender identity and veteran status to existing city code.

Foes of the measure, dressed in blue, urged the 11-member body to spike the imminent vote, or at least postpone it and craft a new proposal that wouldn't trample on their “religious freedoms.”
Proponents, dressed in red, said the issue isn't a religious one. They argued that it's a struggle for human rights.

More than 700 people registered to speak Wednesday. By 10:30 p.m., less than a third had addressed the council.

Some questioned how many cases of discrimination exist in San Antonio and bristled at the powers granted to the city to clamp down on religious expression and free speech. They threatened to dethrone council members who vote in favor of the measure. Others quoted Scripture about eternal consequences for violating socially conservative religious views.

. . . Supporters, meanwhile, urged passage as a long-overdue policy that would not change society but add protections to a vulnerable, deserving group. They also questioned what religion would not want to spread equality and compassion in the treatment of all groups.

. . . Speakers parsed Bible verses and social studies to bolster their opposing views of what the proposed ordinance would do. Conservative Christian leaders cited literal verses of the Bible denouncing homosexuality. Others focused on verses promoting justice, equality and compassion.

Before the meeting began at 6 p.m., people stood in a line through Main Plaza that wrapped around the side of the council chambers. Inside, metal detectors awaited them. Uniformed and plainclothes officers kept tight protocols.

A red-shirted group chanted, “What do we want? Equality. When do we want it? Now.” Members of the same church looked on, wearing T-shirts with their congregation's name and “vote no” stickers.


You can read the full article here.

Related post - How They See Us: Unmasking the Religious Right War on Gay America
Posted by BlackTsunami at 4:56 AM No comments: