Transgender men and women who want to fight valiantly for our freedoms shouldn't have to go through all of this mess. And if it weren't for a certain incompetent, mistake of an obtuse-minded, error of space residing in the White House right now, they wouldn't be.

A federal judge ruled on Monday that the military must move forward with plans for allowing transgender military recruits starting on Jan. 1, 2018. The ruling clarifies an earlier injunction against President Trump's memorandum halting Obama-era policies allowing for transgender service — the first of two injunctions against Trump's order. The Trump administration already has said it is appealing the injunction from US District Judge Colleen Kollar-Kotelly in DC, which was issued in October.


Check back at Buzzfeed for more details as this is a developing story.
Posted by BlackTsunami at 3:55 PM No comments: 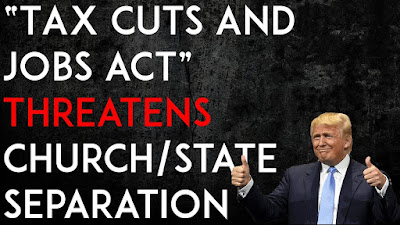 The GOP tax package contains an insidious provision that would ruin the separation of church and state - Imagine anti-LGBTQ pastors such as Franklin Graham and Robert Jeffress having the power to mobilize their followers by actively endorsing candidates with tweets and on their Facebook pages. Imagine their churches - and other right-wing churches - becoming become bastions of dark money by entities like the Kochs and Mercers. It would be legal in the House version of the GOP tax package. Besides other disasters the tax package has for the American public, it also includes a provision which would make such things as I've described as legal. And don't even count on the followers of people like Franklin and Jeffress to show any disagreement. As we have seen in the case of Roy Moore, they are sheep willing to follow these leaders over a cliff.

The many ways Alliance Defending Freedom is fighting against transgender student equality - Naturally groups like this one are for that tax package. It would tremendously help them in their war against out LGBTQ kids. This brief is spooky because someone actually sat down and thought up these methods to harm trans children. Ignoring them or simply calling them bigoted on Facbook isn't enough here.

Chechnya's Leader Says He's Ready to Resign - What's the matter? Too many LGBTQs in Chechnya for you to persecute?

Australian conservatives hope to corrupt marriage equality with ‘religious freedom’ exceptions - Ah yes. We are so familiar with this.
Posted by BlackTsunami at 9:17 AM No comments:

How to hide anti-LGBTQ discrimination in 'religious freedom'

I run with this video accompanied with a serious lecture to my LGBTQ brothers and sisters. On December 5, the Supreme Court will be hearing a case which could potentially codify anti-LGBTQ discrimination as lie. The anti-LGBTQ industry has disguised this mess as "religious liberty" and subsequently has also filled the airwaves, news media, and youtube with videos and the like making it seem that they are merely "protecting Christians."

In reality, "religious liberty" is a code word for homophobic discrimination.  Our side hasn't been so eager to seize the narrative. The most I could find which is remotely on the level to what the other side has been doing is this video from two years ago. It speaks wonderfully, but is rather dated.

I'm hoping that the Supreme Court will not rule for LGBTQ discrimination.  But should they, I intend to join the community in anger and fighting against it. However, forgive me for rolling my eyes every now and then at yet another time we aren't weren't proactive and have to catch up on just how potentially dangerous things happening around us are: