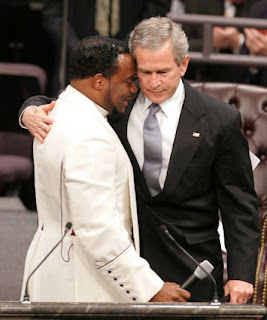 Anti-gay pastor Eddie Long has been hit with a third sexual coercion lawsuit by another male ex-member of his church.  Long is continues to deny any wrongdoing and it has come out that one of the men filing the lawsuits has a burglary charge against him:

Bishop Eddie Long made a church summer camp counselor call him “Daddy” and coerced him into sexual acts, according to a lawsuit filed Wednesday against the mega-church leader.

The suit, similar to two filed on Tuesday (Read a PDF of one of the earlier lawsuits), accuses Long of using his power to force the plaintiff into a sexual relationship. In exchange, Long placed Parris and the two other men on the church’s payroll, bought them cars and other gifts, and took them on lavish trips, according to the suits filed in DeKalb County Superior Court.

Long adamantly denies the allegations and has scheduled a press conference Thursday morning.
“It is unfortunate that these young men have chosen to take this course of action,” Long's attorney, Craig Gillen, told the AJC Tuesday night

And today, several church members came out in support of Long saying that the charges are lies:


Church members . . .  said they simply didn't believe the allegations, speaking of Long's love and passion for his wife.

Atlanta-area radio host Frank Ski, a 12-year-member of Long's church, told the Atlanta Constitution-Journal that he had "extreme support" for the man he's known for more than a decade.

"It's difficult for me because Bishop Long and I are very close," he told the paper. "I'm one of these people who's really old school. When you're a friend and I support you, I support you. Right now it's allegations."

Florida's gay adoption ban ruled unconstitutional - AND it was unanimous too. A huge victory which should not be obscured by yesterday's defeat.

Dan Savage Creates YouTube Channel to Help Gay Teens - I've given Dan Savage hell via conversation for some of the things he has done and said. But in this case, he needs to acknowledged for this positive thing.

Archbishop: Anti-Gay Marriage DVD Will be Mailed to All MN Catholics - This is NOT good. Over 800,000 people will receive this mess. Careful Catholic Church. You can't handle the pedophilia problem in your ranks but you break your backs in pushing against the marriage of consenting adults who love one another. Kismet will come back on you.

Saxby Chambliss investigating whether staffer left gay slur - You know the story. Have at it.

What else can be said about the DADT repeal filibuster which hasn't?

This is Sen. John McCain saying that the military does not target lgbt soliders for discharge. He said this in spite of the fact that, according to ThinkProgress.org:

While the Defense Department did adopt higher standards for discharging gay and lesbian soldiers in March, the military has dismissed servicemembers after discovering their sexual orientation in email records. For instance, Major Mike Almy — a 13-year veteran of the Air Force — was relieved of his duties after a routine search of computer files uncovered emails to his same-sex partner.

In fact, as Almy explained in testimoney before McCain’s own committee (Senate Armed Services): “In Iraq, during the height of the insurgency, someone in the Air Force ordered a search of my private emails solely to determine if I had violated “Don’t Ask, Don’t Tell”, and to gather whatever evidence could be used against me.” “I was relieved of my duties, leading nearly 200 Airmen, my security clearance was suspended and part of my pay was terminated. Even as my commander was relieving me of my duties, he assured me this was in no way a reflection of my performance or my abilities as an officer,” Almy testified.

So even though a soldier testified that he was targeted and discharged, McCain still refuses to believe it.

Which goes to show that at the root of the continuance of the DADT policy is willful ignorance.