Franklin Graham thinks his religion makes him an authority on science

Because of their support of him in the 2016 election, Trump has allowed conservative evangelicals leaders to gain access in his Administration. And due to this, many of them are out of control in terms of attempting to force policy on the rest of us. Many of them are blurring the lines between religion and politics.

None are more blatant about it than Franklin Graham. He has been supportive of Trump to the point of bending over backwards to dismiss his many faults. From time to time, he also sends proclamations to his over one million followers on twitter, like this one in which he sly infers that they should vote for Republicans in the upcoming midterm election or risk losing "religious liberty." 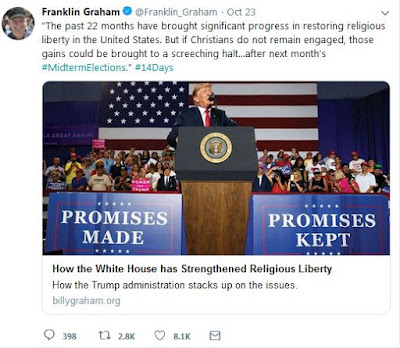 No one should buy the inevitable spin that Graham is merely taking advantage of his First Amendment rights. That is a lie and those who say it know this. Graham is exploiting his status as a highly prominent American religious leader to campaign for a political party.  He is adding a dangerous component to politics, i.e. the notion that voting for the "wrong" party is tantamount to sinning and God will punish you if you do. It is unethical on all counts and may be illegal. But who is going to demand that he be prosecuted for it? Who will attempt to stop him?

Read more »
Posted by BlackTsunami at 5:09 PM No comments:

Apparently, as we draw closer to the midterms, members of the GOP and their supporters are showing desperation, i.e. either pushing homophobia to scare voters or dropping all pretenses of piety:

An attack ad for an LGBTQ-friendly Republican shows a bizarre gay marriage - The ad, seen above, is disgusting. The comments are disabled for a reason.

How Dan Savage became an election issue in a Congressional race - It's getting deep in here.

And the pièce de résistance - Franklin Graham tweeted NOTHING about the terrorist threats yesterday via bombs mailed to Obama, Clinton, CNN, etc. Not a request to pray for whom the bombs were sent to or anything offering up sympathies. BUT he did send this lovely tweet out today:

Granted, if Graham sent out any prayers or sympathies in any other way, please let me know and I apologize beforehand if he did. All I know if Trump was sent this any of this stuff, Graham would be asking everyone pray, lay hands, speak in tongues, etc. As it stands now, Graham is so busy being partisan that he has forgotten to be Christian.

Democrats double down on Equality Act ahead of midterm elections - Meanwhile . . .

Trump’s anti-trans memo joins a long list of attacks against transgender people - Siiiigh! Pull up the list.
Posted by BlackTsunami at 9:18 AM No comments: