During a Congressional hearing in May, Education Secretary Betsy DeVos indicated that she had no problem funding schools who would discriminate against LGBTQ families and children. At the time, I accused her of "weaseling" out of questions by invoking the word "flexibility." This what happened.

Education Secretary Betsy DeVos said Wednesday that states should have the flexibility to decide whether schools can discriminate against LGBTQ students ― even if those schools get federal money. During a testy exchange in a House Appropriations subcommittee hearing, Rep. Katherine Clark (D-Mass.) told DeVos about Lighthouse Christian Academy, a private school in Indiana that receives state voucher money but denies admission to students from families where there is “homosexual or bisexual activity” or someone “practicing alternate gender identity.” Clark asked DeVos, whose budget seeks a $250 million increase for projects that include vouchers for private schools, if she would step in if that Indiana school applied for such federal funding. DeVos replied by saying she supports giving flexibility to states. “For states who have programs that allow for parents to make choices, they set up the rules around that,” she said.


Today, she made what can be called an unfortunate 180 degree turn when it comes to protecting LGBTQ families and children. She pretty much said that it is not her department's job to protect them from discrimination. And again, she "weaseled" out when asked a direct question about it:


During Tuesday’s hearing, Sen. Jeff Merkley (D-OR) asked DeVos about whether or not her department would continue to provide federal funding to schools that had anti-LGBTQ policies. At first she tried to dodge the question by asserting, “Schools that receive federal funds must follow federal law.” But Merkley pressed, leading DeVos to say, “In areas where the law is unsettled, this department is not going to be issuing decrees. That is a matter for Congress and the courts to settle.”

Merkley continued to grill for DeVos for clarification, but she refused to comply. “You’re refusing to answer the question,” he said. “I think that’s very important for the public to know — that today, the Secretary of Education, before this committee, refused to affirm that she would put forward a program that would ban discrimination based on the LGBTQ status of students or ban discrimination based on religion.”


No doubt, some will say that DeVos answered the question.

The question she was answered in May and the one today required a simple yes or no. Why did DeVos have to dance around in giving her answer? I'll let you decide.
Posted by BlackTsunami at 5:17 PM No comments: 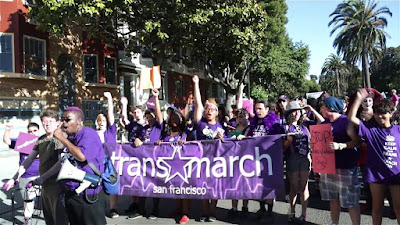 Nearly 50 years after Stonewall, trans people still feel excluded at Pride - Not just transgender folks probably feel this way. I think this is a symptom of a larger problem in our community in terms of visibility and who gets anointed as leaders and spokespeople. But let's just keep it at Pride for the moment.  Pride is a wonderful event for all and it's grown in so many different areas. With the growth comes debates involving concepts of pride, sponsorship, entertainment, etc. Personally, I don't feel there is anything wrong with intelligent debates about what exactly is Pride and what it should be. We need to listen to each other in the spirit of cooperation.  I have definite opinions on the matters but feel that when it all comes down to it, Pride should be something which gives us all joy, love, and motivation to make this world a better place - and not just for those in our "circle." We keep that belief in mind and we can get through the debates.

Laverne Cox speaks out against people who don’t see transgender women as real women - Take them to school, Laverne!!!!

Coming Out: The Pros and Cons - Never forget our personal stories.


20 Perfect Tweets That Sum Up Watching "Wonder Woman" As A Queer Woman - THIS is hilarious!

Photo taken from Transmarch.org
Posted by BlackTsunami at 9:08 AM 1 comment: