A recent controversy between the charity  database webpage Guidestar and several groups designated by the Southern Poverty Law Center as hate groups continues to rage because one of those groups is now suing Guidestar.

Florida-based legal advocacy organization is suing over a "hate group" label that it and other nonprofits received on a website that maintains a database of information about U.S. charities. Liberty Counsel Inc. filed a federal lawsuit Wednesday against GuideStar USA Inc. in Newport News, Virginia. GuideStar flagged 46 nonprofits, including Liberty Counsel, for being labeled as hate groups by the Southern Poverty Law Center. Liberty Counsel's suit claims that label is slanderous and has damaged its reputation. GuideStar announced last Friday that it would remove the labels after threats directed at its staff. Liberty Counsel bills itself as a legal defense organization dedicated to advancing religious freedom and preserving family values from a "Christian and Biblical perspective." The law center has called it an "anti-LGBT hate group."


From its webpage, the Liberty Counsel said the following:

“GuideStar and its political ally, the Southern Poverty Law Center (SPLC), are intent on destroying pro-family organizations. The ‘hate group’ label is false and dangerous,” said Mat Staver, Founder and Chairman of Liberty Counsel. “GuideStar’s CEO, Jacob Harold, is using GuideStar as a weapon to defame, harm, and promote his liberal agenda by using the SPLC to falsely label good nonprofit organizations as ‘hate groups.’ The only purpose of providing the SPLC false and dangerous ‘hate group’ label is to inflict reputational and financial harm to Liberty Counsel. GuideStar has lost all credibility. GuideStar will now have to answer for its reckless, defamatory, and harmful political labeling,” said Staver.


Personally, I think the Liberty Counsel is walking into the mouth of a hungry tiger.  It's a possibility that Guidestar may not want to get into a lengthy battle and therefore will work to settle this lawsuit. I sincerely hope not. It's my hope that Guidestar refuses to back down because truth is on its side. Based on a paper trail a mile long, it shouldn't be impossible for the webpage to disprove the Liberty Counsel's charges.

For its part, SPLC said the following:

"We stand ready to support our designation of Liberty Counsel as a hate group. "Liberty Counsel is a group that has consistently called LGBT people 'immoral, unnatural and self-destructive.' It has a track record of attempting to criminalize homosexual conduct and to legalize discrimination against the LGBT community. "There is nothing 'pro-family' about dehumanizing LGBT people. This lawsuit and other recent attacks against GuideStar are simply attempts to distract the public from Liberty Counsel’s hateful agenda."


Should Guidestar not back down, distraction will be the name of the game via conservative, right-wing, and anti-LGBTQ propaganda groups and phony news services. The Liberty Counsel will probably have a lot of defenders, but none of them, whether Todd Starnes, The Daily Signal, World Net Daily, The Federalist, Breitbart, One News Now, Fox News, etc. will mention why the Liberty Counsel is considered a hate group. The narrative they push will most likely be how "the left" is "targeting" the Liberty Counsel simply because they disagree with its 'Christian values.'

One of Donald Trump's lawyers, Jay Sekulow, has been the media's eye repeatedly. A lot of folks aren't aware of exactly who he is. However, I am because I used to watch his appearances on The 700 Club in the late 80s and early 90s.

Sekulow has an extensive history of being one the religious right's hardcore weapons against the LGBTQ community.

Jay Sekulow, who joined Trump’s team this month, is chief counsel for the American Center for Law and Justice, a far-right legal group founded by no less than Pat Robertson and based at Robertson’s Regent University in Virginia. Sekulow holds a Ph.D. from Regent and is a professor at its law school. His law degree is from another university that claims to promote “Judeo-Christian” values, Georgia’s Mercer University. He’s a frequent commentator on Robertson’s Christian Broadcasting Network and Fox News Channel.

The ACLJ has represented many anti-LGBT and antichoice clients and causes. “ACLJ’s materials are often explicitly homophobic, and their fundraising emails signed by Sekulow have warned that the homosexual agenda is ‘bent on destroying our communities’ and ‘the family as we know it,’” the Human Rights Campaign reported in a 2014 press release.


And it gets worse, according to Right Wing Watch:

Sekulow and the ACLJ have been active in the U.S. and overseas in opposing legal equality for LGBTQ people. Sekulow has said that the state has a “compelling interest to ban the act of homosexuality” and the ACLJ argued on behalf of state laws criminalizing gay sex that were overturned by the Supreme Court in 2003. Sekulow said the Supreme Court overturning the Defense of Marriage Act meant that “we’re now living in a monarchy.” The ACLJ and its international affiliates engage in anti-LGBTQ and anti-choice culture wars in the U.S., Africa, Europe and Russia. In Africa, it worked to shape constitutional language in Zimbabwe, where it has fought to maintain criminalization of homosexuality, and Kenya, where it lobbied to eliminate an exemption to an abortion ban to save a woman’s life. Both the European Center for Jaw and Justice and the Slavic Center for Law and Justice supported Russia’s notorious anti-gay “propaganda” law, which has been used against journalists and gay rights activists.


You know I'm leading to a delicious finish and here it is:

Read more »
Posted by BlackTsunami at 3:03 PM No comments: 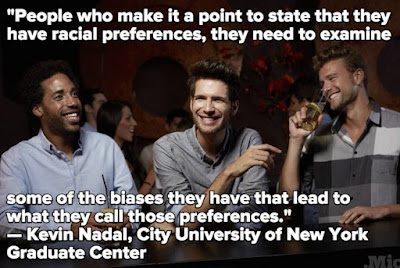 Taboo Sex, Racism, and Gay Men: A Chat in Black and White - A small change of pace today. A good friend of mine, Mark S. King, has a conversation with Charles Stephens, founder of the Counter Narrative Project in Atlanta, about taboo sex, racism, and gay men. And it is good!!!! It is a conversation which needs to be had (especially from my perspective, seeing that I have been turned down from men who were expecting Mandingo and found that they ended up with the sepia Woody Allen.)

Trump pretends to care in National HIV Testing Day statement, while cutting funding for treatment - Does this surprise anyone? Sad.

Here’s How Germany Could Approve Same-Sex Marriage Within Days - Well this is a wonderful development.

13 Same-Sex Weddings That Prove Happily-Ever-Afters Exist, And OMG I'm Crying - Admit it. You know you like seeing things like this.