When I wrote the post Monday about the secret Facebook group Truth4Time, I knew it had the potential to be a huge story.

However, I never expected for it to explode in the manner which it did. I didn't expect to be interviewed by Michelangelo Signorile and I certainly didn't expect for it to be the number one story in the Huffington Post Gay Voices section.

Now I did expect some negative feedback from members of the group and administrator Michael Brown didn't disappoint.

He was allowed to publish what he called corrections to the Truth4Time article Signorile wrote. I found these corrections to be disingenuous and wrote so in the comments section and in more detail on a blog post.

I felt the story should have ended there. Let folks read it and make up their own minds.

But for some reason, neither Brown nor the other members of the group will let the story go.

Brown not only parlayed the story into a ludicrously transparent post on the conservative Town Hall (comparing my post to Protocols of the Elders of Zion - the legendary fraud document which claimed that Jewish people plotting to take over the world)  but also a feature on his radio show. I have no doubt that there may be a future column on the American Family Association's One News Now.

His spiel seems to be claiming that the group was merely innocent Christians who was inundated by homosexuals simply because they were merely condemning them to hell and supposedly telling the truth that God hates "their lifestyle," whatever that is. Brown also seems to be claiming that those documents I posted detailing plans of jamming and flagging pro-gay sites and sending school districts and physician offices' bad information on gay health were "mere suggestions." He also seems to be saying that just because some people had access to the group's resources didn't mean that they were members.

Doesn't Michael remind you of that Eddie Murphy comedy routine in the movie Raw, where a man's wife catches him redhanded cheating on her and when confronted by her, he continuously says "it wasn't me" until she begins to doubt what she saw.

Another member of Truth4Time, a sad African American pastor, D.L. Foster who claims that he is an 'ex-gay," cited Brown's ridiculous column to claim that my post was a bomb. Ironically,  I wrote him a note disputing this. Of course it is no longer on his page.

All you need to know about Foster is that he was one of the participants in Peter LaBarbera's failed protest against the Southern Poverty Law Center.

But probably the funniest, albeit creepiest response from a Truth4Time member I've gotten is from small-time radio host Stacy Harp. I wrote this morning about how she spent 30 minutes of her broadcast calling me a nobody for my post (in between insulting Rachel Maddow and Michelangelo Signorile) and also sent a post demanding that I apologize: 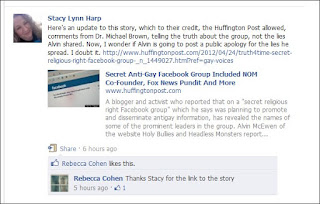 It gets funnier. Girlfriend just can't quit me: 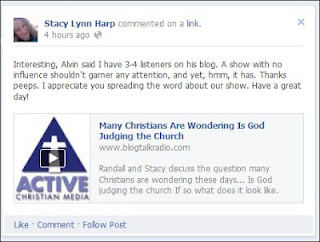 Sorry Stacy. You are not my type. And we are not two ships passing in the night. If we were,  I would throw my anchor on your deck in hopes of sinking you.

Ironically, Foster claims that I wrote the post because I wanted wide media attention. Now in reality, I am not that naive. I know that the media has more important stories to attend to, such as interviewing the woman who spilled yogurt on President Obama.

My purpose of posting the Truth4Time post (which I stand by) was basically to expose the lies and deceptions of Brown, Harp, Foster, and the rest who exploit Christianity and who seem to think that Jesus died on the cross for them to lord over folks and gave them the right to decide what makes a family.

They have a serious sense of entitlement which needs to be broken.

The fact that I am making them dance like puppets on a string is merely gravy.

But I do have three questions.

If this is such a non-story, then why are they all spending so much time and effort on it?

Just who are they really trying to convince?

Lastly, can any of them do the macarena or tootsie roll?

Posted by BlackTsunami at 3:24 PM 9 comments:

Perkins: Questions About Obama's Birth Certificate are a 'Legitimate Issue' - Chris Matthews of Hardball now has a dilemma. In the past, he has been known to eviscerate "birthers" or people who don't think that President Obama is a United States citizen:

So now what is he going to when someone whom he has defended as being a guest on his show, Family Research Council's Tony Perkins, is now flirting with birtherism:

The ball is now in your court, Chris.

NOM to supporters: Dump Starbucks is now a global failure - We know this already but its always fun to hear.

Anti-Amendment One videos: Sen. Hagan, Gov. Perdue, Rev. Barber, and a jaw-dropping domestic violence video - I have so much admiration for folks fighting in NC against Amendment One.

Editor's note - It's one of those two post days. After reading about this sad attempt by the National Organization for Marriage to yet again divide the black and gay communities, pan down and read the hilarious post about Truth4Time members demanding that I apologize.

The National Organization for Marriage has come out with a doozy of a nasty video which plays into its infamous wedge strategy:


That's the darkness. The following videos are the light:

Finally, as the following video shows through its simplicity, lgbtqs of color exist. And NOM's race-baiting strategy hurts them:

Hilarious homophobes want me to apologize

Members of the secret anti-gay Facebook group Truth4Time have been steadily trying to play defense in light of being discovered.

Yesterday, I talked about Michael Brown's silly attempt to accuse me of distorting the purpose of the group. This morning, a friend sent me the following: 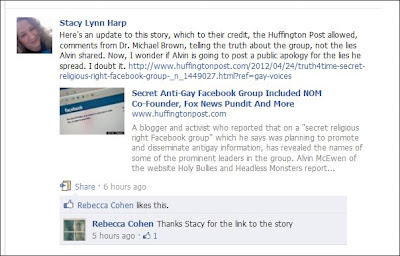 Stacy Harp runs a small-time radio program, supposedly of the Christian variety. However when one hears her, I doubt they would mistake her for a Christian. She is egotistical, nasty, and extremely hateful. The best way to describe her is an offshoot of the Phelps family without the doom and gloom but still no charm.

But she can be amusing. On her program yesterday, she talked about how much of a nothing I was for probably 30 minutes. Apparently she missed the Biblical admonition of knocking dust off of her shoes.

At any rate, if girlfriend expects an apology from me for my truthful accounts of Truth4Time, she is going to be waiting a loooooong time.

Posted by BlackTsunami at 4:41 AM 8 comments: