To the fool who wants to "save" my soul from homosexuality . . . do not come for me 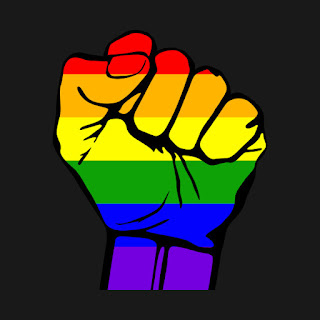 Every now and then, I get interesting messages from people trying to "save" my soul from the supposed sin of homosexuality. I got this one today:

Homosexuality SHOULD be AVOIDED and not celebrated. Straight people(Christians especially) do not 'celebrate' homosexuality. We serve a God who shuns gay lifestyle as an abomination. We don't stand for gay lifestyle. We stand for Godly lifestyle. We have every right not to take part in applauding homosexuality. Jesus loves you. He died for you to SET YOU FREE from your sins, not so you could PERISH celebrating the wrong things. Gays certainly don't celebrate Christianity and heterosexuality. So why should we celebrate men destroying themselves with AIDS? How is that a GOOD thing?


Dear Person Who Makes A Lot of Assumptions,

If I ever need to find out what God thinks of homosexuality, I will go to the source and ask Him. As it is, I already know the answer. The God I know doesn't shun his LGBTQ children. He made us exactly as we are. To paraphrase a Biblical quote:

We are the Lord's doing and marvelous we are in His eyes.

I know this personally because it is my faith in God which allowed me to accept myself exactly as I am. Perhaps you should educate yourself before you draw LGBTQs and Christians into two opposite camps. Some of us are Christian, some of us are Jewish, some of us are Muslim, while some of us embrace no religion at all. I don't need some irrelevant nobody to tell me that Jesus loves me. I know that already. As God made me to be gay, Jesus loves me as gay.

What you claim to stand or not stand for is none of my concern. No one is forcing you to celebrate anything you don't want to. But I am telling you that we are as much a part of this world as you and you need to lose that self-righteous tone which led you to invade my blog and start pronouncing judgements on me without the courtesy of getting to know me.  If you don't like it, that is your problem. You have no right to demand that the LGBTQ community live our lives embracing your sad sense of entitlement. You have no right to demand that we edit our lives to suit your ignorance and lurid imagination of what you think we do in the bedroom.