No matter how Florida Gov Ron DeSantis and his supporters attempt to spin the 'Don't Say Gay' bill as something to protect children, reality smacks them in the face.

And on Tuesday, that reality came in the form - of all people - Franklin Graham: 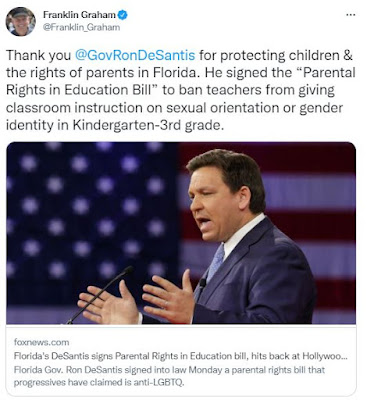 Graham's comments should surprise no one. He is a bigoted homophobe who would praise anyone for any undermining of LGBTQ lives, no matter how big or small. Graham would even compliment Russian president, Vladimir Putin for anti-LGBTQ persecution.

In 2014, Graham praised Putin for signing a somewhat harsher law in Russia. The bill, passed in 2013, criminalized all positive LGBTQ speech and advocacy:

“In my opinion, Putin is right on these issues,” Graham writes. “Obviously, he may be wrong about many things, but he has taken a stand to protect his nation’s children from the damaging effects of any gay and lesbian agenda.” “Our president and his attorney general have turned their backs on God and His standards, and many in the Congress are following the administration’s lead. This is shameful.” With the caveat that “I am not endorsing President Putin,” Graham nonetheless praised Russia’s get-tough approach toward gay rights. “Isn’t it sad, though, that America’s own morality has fallen so far that on this issue — protecting children from any homosexual agenda or propaganda — Russia’s standard is higher than our own?”

In 2015, Graham went further in his defense of Putin and his attack on LGBTQ people:

I have met the president on several occasions. He’s a very nice person. But he supports and promotes policies that contradict the teachings of God. As a Christian I believe that abortion is murder, he supports it. Homosexuality and same-sex marriage — those are sins against God, and the president is promoting them. I’m not against homosexuals as people. But God commanded that marriage should be between a man and a woman. And I very much appreciate that President Putin is protecting Russian young people against homosexual propaganda. If only to give them the opportunity to grow up and make a decision for themselves. Again, homosexuals cannot have children, they can take other people’s children. I believe that President Obama (and I’ll repeat, he’s a very nice person) is leading America down the wrong road. He’s taking a stand against God.

Great company you're in, DeSantis.
A bloodthirsty dictator  who signed a law which criminalized all pro-LGBTQ speech and a religious hypocrite who praised him for it
Posted by BlackTsunami at 4:38 PM No comments:

Biden, Florida officials and Disney blast DeSantis’ signing of ‘don’t say gay’ bill - Thank you President Biden for being a real president.
Disney Vows to Help Repeal Florida's 'Don't Say Gay' Legislation - Get to work, Disney.
The 7 queerest moments from an unforgettable Oscars ceremony - The slap aside, it was a very good night.
Utah Students Organize Queer Prom After State Passes Anti-Trans Bill - Good for them!
Posted by BlackTsunami at 9:14 AM No comments: