The Family Research Council are going to be soooo angry at Congresswoman Marsha Blackburn:

At the South Carolina Freedom Summit, Rep. Marsha Blackburn (R-TN 7) advocated State Department intervention when asked what role the United States should play in protecting Christians around the world:


One of the things that we should be doing here is being very strong in our stance with religious freedom in our country... Our allies around the globe want to see us stay strong on our rights and not erode those rights... With the human rights violations and religious persecutions around the globe, we need a State Department that is going to step in and say, "This is not acceptable."

Blackburn thought that Christians are being persecuted in the U.S., but could not give any examples when asked by this reporter. Watch her remarks below:

I think that says it all regarding this "Christian persecution" nonsense. Thank you, Congresswoman Blackburn
Posted by BlackTsunami at 2:35 PM 3 comments:

'The knife of Kirsten Powers' & other Tuesday midday news briefs 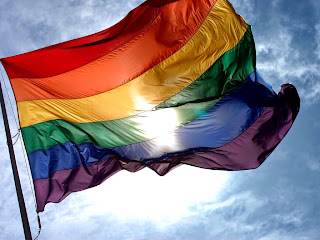 The supposed 'Silencing': How Kirsten Powers Is helping far-right sell pervasive meme - This situation brought me down yesterday and it is still poking at my mind today. Jeremy Hooper puts the entire situation in perspective better than I can. But in a nutshell, I learned an ugly truth. Sometimes when a pundit claims to be for lgbt equality, it is only for the knife to go deeper when they stab the community in the back. Such is the case with "Fox News liberal" Kirsten Powers. She has just published a "liberals and gays are trying to silence their critics" book, which should garner her much popularity and attention. I learned two things by this experience regarding her book. From the excerpts I read thus far, her book is no different than any of the books written by conservatives like Jonah Goldberg, Laura Ingraham, or Ann Coulter. Heck, the cover of Powers's book is clearly stolen from the cover of one of Coulter's book - i.e. skinny blond in fetching outfit standing defiantly with her hand on her hip besides the book title. Powers offers nothing new. It's not simply the idea that Powers is pushing. It's that the idea is pretty much a carbon copy of the other books which whines that liberals and gays are "silencing" people and she uses the same half-baked anecdotes already offered as proof of a conspiracy and flowery language to cover up the fact that her theory is simply a conservative wet dream. Powers is merely tracing, i.e. copying a formula and claiming that her spin on it is original when it is actually old and stale. The only difference being is that she is supposedly a "supporter" of lgbt equality. In essence, she is exploiting her so-called relationship with lgbts to sell her book. And the second thing I learned? From reading Jeremy's post, people like Powers are always whining about being silenced, but they generally (and probably deliberately) mistake debate challenging their ideas as attempts to silence them. Sorry for the long expository, but it depresses me when stories of our pursuit for equality are bastardized for profit, particularly those who are supposed to be on our side.

Breaking–Exclusive: Activist Admits Her Testimony To Senators On Texas Anti-Gay Bill Was False - This just took place. Watch how quickly some in the media will try to obscure this.

How To Assess The ‘Truth’ When Writing About Transgender People - This isn't difficult to do if folks were willing to learn rather than scare themselves.

What Happened When A Gay Dad Challenged A School Over Its Cancelation Of An LGBT-Themed Play - Wonderful!

Ireland Is About To Become The First Country To Vote For Same-Sex Marriage - Don't count the chickens before they hatch. And I hope they hatch very well.
Posted by BlackTsunami at 9:17 AM No comments: