Poor Roy Moore. Gay men are living rent free (and having sex) in his head

Removed judge and failed Senate candidate Roy Moore wants to run for the Senate again but can't seem to shake his obsession with gay men. Or specifically how he thinks they are having sex.

Moore spoke recently to the Huntsville Republican Men’s Group, according to the Alabama Political Reporter: “We have got to go back to what we did back in the sixties and seventies back to a moral basis,” Moore said. “We did not have a national healthcare system. You know when Obama passed this thing rising all our costs and business started going down the tube everybody said it was going to be repealed. You never hear anybody in Congress talk about it now. Our indebtedness was $22 trillion. Back in the sixties and seventies it was much lower. It was a sixth of that. Abortion was not legal when I went to Vietnam. It was passed later. It was OK’d later. We had abortion laws in our country and our state. We did not have same sex marriage. We did not have transgender rights. Sodomy was illegal. These things were just not around when my classmates and I went to West Point and Vietnam.”


Moore is not only sadly deluded, but also naive. He claims that sodomy wasn't around when he attended West Point. West Point was all-male when Moore attended.  I am almost certain that sodomy had a nice little corner room at the back of the campus, where it had a number of visitors.

I'm not trying to be disrespectful. I'm simply being real.

But wait. Moore continued to reminisce:

“We have drag queens teaching kindergarten children in this state and this community….in Huntsville in Mobile they taught kids and they dress them up in drag,” Moore told the audience. “Where does this come from? Gender identity is being taught in California to young kids and parents have no choice but to let their kids be taught that.”


It's always entertaining when bigots and homophobes weep for bygone ages in which their mindsets of ignorance ruled the day. It's a wonderful reminder of the battles we have won.
Posted by BlackTsunami at 4:12 PM No comments: 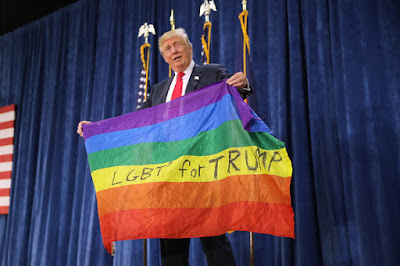 Under Trump, LGBTQ Progress Is Being Reversed in Plain Sight - People should read this and take it into account.

In His Bid for Congress, This Gay Doctor Believes D.C. Needs More Medical Professionals Elected - And I agree with him.