Conservative evangelicals need Trump like an addict needs his 'fix'


I said it yesterday and lo and behold here it is.

Family Research Council president Tony Perkins, who knows he stepped into it earlier this week with his "religious conservatives will give Trump a do-over for his bad behavior"  comments, continued in attempts to soften the blow of hypocrisy.

Perkins said that evangelical faith leaders’ support for Trump is “not unconditional” but that “as long as he continues to be the most pro-life, pro-family president” and “continues to walk the straight and narrow with the right influence,” Perkins and his allies will continue to support his administration.

“Thanks be to God for giving President Trump a burden to champion religious liberty. May Christians pray for and support the president for the good thing he is doing, even if they cannot approve of his past or present behavior in other respects.”


Not to be outdone, Franklin Graham, fresh from humiliating himself with awful defenses of Trump's behavior, is telling people to pray because Trump is supposedly facing a coup de etat. Franklin is echoing nonsense which shot up then fizzled down in right-wing circles about a secret government group working to overthrow Trump.

Bryan Fischer Says There Is No Reason For The Religious Right To ‘Punish America’ By Turning On Trump For His ‘Reprehensible’ Behavior -  Bryan Fischer becomes the latest religious right figure to show hypocrisy when it comes to Donald Trump. I am so enjoying taking down these receipts. I'm going to need another book to put them all in.

In three years, LGBT Americans have gone from triumph to backlash - This neither surprises nor scares me. Students of history will tell you that after every successful movement for civil rights comes a huge backlash. The key is to strap yourself down and solider on fighting no matter what.


Tolerance takes a hit: Americans less accepting of LGBT people in 2017, survey shows - Another view of the issue just in case the above link is behind a pay wall. Awful headline, though. LGBTQs are not dogs urinating on the good carpet. We don't need "tolerance" or "acceptance." We need fairness and all that we need, including fairness, will be what we will take because they all belong to us in the first place.

Conservative book ‘When Harry Became Sally’ attacks trans people while conveniently leaving them out - Another book attacking the LGBTQ community and like all of the others, it's filled with distortions.

Nearly 700,000 adults in the US have received gay conversion therapy - And guess how much have worked . . . go ahead. 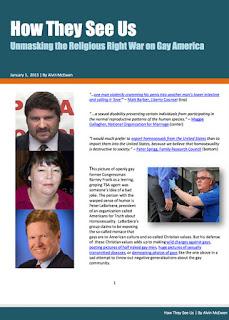 NOW would be a perfect time to remind people that support of Donald Trump is not the only area in which evangelical conservatives have displayed questionable morals. Let's talk about their DECADES-LONG war on the #LGBTQ community via propaganda and junk science.

Just click on here to read and send (even if you have already) my free 2103 online book How They See Us: Unmasking the Religious Right War on Gay America.