Know Your LGBT History - Gay documentaries, past and present

You want an example of how far the lgbtq community has come? Check out documentaries looking at our lives.

The Homosexuals (sounds sinister, doesn't it?) was a CBS documentary which premiered in 1967. I will just break it down in two words - it stunk.

Three years in the making, "The Homosexuals" went through two producers and multiple revisions. The episode included interviews with several gay men, psychiatrists, legal experts and cultural critics, interspersed with footage of a gay bar and a police sex sting.

As you can tell, it was not a fair documentary to our community. In all honesty, though, we are talking about 1967. Harvey Milk hadn't even come on the scene yet. And the Stonewall Riots were two years away.

Still, as the following clips shows, there is a reason why Wayne Besen of Truth Wins Out called this documentary "the single most destructive hour of antigay propaganda in our nation's history."

If you closed your eyes, Wallace would remind you of Peter LaBarbera or Peter Sprigg.

Now take a look at a clips from a documentary which will be premiering next week to commemorate the end of Don't Ask, Don't Tell:


The phrase "as different as night and day" is a cliche, but in this case, it is a very apt cliche to use.

We have come a long way, haven't we? And we haven't even finished accomplishing what we are going to accomplish in this world. Don't let the haters get you down. Always fight and never give up.


Past Know Your LGBT Posts:

Boehner Claims Homosexuality Is A Choice In Effort To Preserve ‘Defense Of Marriage Act’ - More and more, the case for DOMA is becoming a repeat of the case for Prop 8. I hope that the outcomes will also be similar.

Perry's Prayer Rally, The AFA, And Champion The Vote - Rick Perry lied when he said that his prayer event wouldn't be political.

New York Clerk Could Face Lawsuit for Marriage License Refusal
- The religious right no doubt wants this. I say bring it on!

New analysis shows startling levels of discrimination against Black transgender people - And folks, this does not look good.

Why Americans for Truth is an anti-gay hate group

Americans for Truth about Homosexuality is one of the so-called "pro-family" organizations labeled as a hate group by the Southern Poverty Law Center.


"They're treating pro-family groups like pariahs," the AFTAH founder compares. "It's a very dirty tactic, because we're not about hate; we're about loving people enough to tell them the truth . . ."

LaBarbera at the time was whining about how the media wasn't covering the fight between groups like his and the gay community as he thinks it should be covered, but let's look at his claim about "telling the truth."

The following are LaBarbera's idea of "telling the truth": 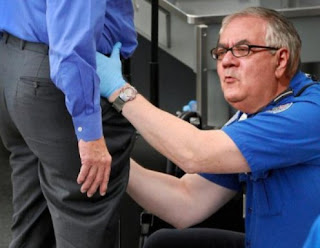 This is a badly doctored photo of openly gay Congressman Barney Frank. LaBarbera posted it on his site to accompany a ridiculous claim that gay TSA agents are getting their thrills by groping men.

No doubt Labarbera claims that it was a joke, but it's  a rather tasteless attack on the gay community and its par for the course for LaBarbera.

Other things LaBabera has done to earn his organization's hate group status includes:

1. attempting to smear GLSEN (Gay, Lesbian, and Straight Education Network) days before its annual Day of Silence event via a fake controversy involving pictures on a facebook page not even associated with GLSEN.

2. Smearing gays via a CDC report on an increase on HIV while intentionally downplaying the part of the report which clearly places the blame on this increase on homophobia (while at the same time implying that the report "dispels the homophobia causes AIDS propaganda")

Read more »
Posted by BlackTsunami at 5:02 AM No comments: