During this weekend in which we are hearing all sorts of awful stories about the bad treatment of migrant children in border facilities and the illnesses they are suffering because of it, one would think some who have designated themselves as the nation's religious leaders would speak out.

Not so with prominent right-wing pastor Franklin Graham. He is too busy forwarding the probably soon-to-be newest religious right attack against the transgender community, ie. the false belief that transgender girl athletes have an unfair advantage over other girls in sports: 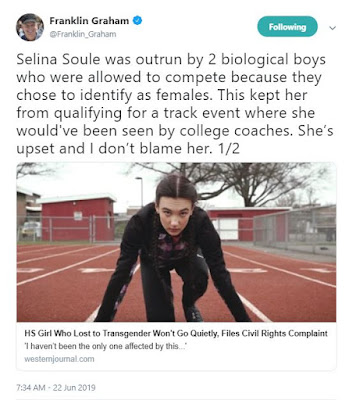 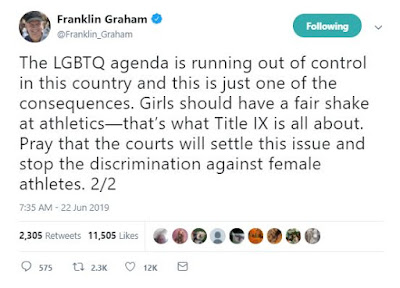 I am aware that it is easy for folks to get distracted and go off on a tangent about transgender athletes. And I am sure we are going to be hearing more about it. I would suggest that people educate themselves on this matter before allowing themselves to get sidetracked. There is information out there.

And basically, the issue itself regarding transgender athletes isn't the point. This is the point:

1. Four toddlers were so severely ill and neglected at a U.S. Border Patrol facility in McAllen, Texas, that lawyers forced the government to hospitalize them last week. The children, all under age 3 with teenage mothers or guardians, were feverish, coughing, vomiting and had diarrhea, immigration attorneys told HuffPost on Friday. Some of the toddlers and infants were refusing to eat or drink. One 2-year-old’s eyes were rolled back in her head, and she was “completely unresponsive” and limp, according to Toby Gialluca, a Florida-based attorney.

2. A 2-year-old boy locked in detention wants to be held all the time. A few girls, ages 10 to 15, say they’ve been doing their best to feed and soothe the clingy toddler who was handed to them by a guard days ago. Lawyers warn that kids are taking care of kids, and there’s inadequate food, water and sanitation for the 250 infants, children and teens at the Border Patrol station.


Graham's voice was and still is needed here. Throughout history from Martin Luther King, Jr to Oscar Romero to Bishop Desmond Tutu, prominent religious leaders have used their platforms and risked their very lives to give voice to those abused by the system. But Graham hasn't.  Not at this time in which his voice would be so vital. And I don't understand why.

Why did he chose to bully other children instead of speaking out for migrant children. Speaking out for these children wouldn't have cost him anything, except maybe  to lose favor from Donald Trump.  And here I thought Graham sought the approval of a higher power than Donald Trump. Obviously not.

Posted by BlackTsunami at 4:07 PM No comments: