A month of anti-gay hell

From Think Progress has come up with something which NEEDS to be shared far and wide:

As perhaps a backlash of North Carolina’s passage of Amendment One and President Obama’s support for marriage equality, May proved to be rife with anti-gay rhetoric in churches across the country. Here is the month’s worth of anti-gay rhetoric compiled into one video:

I like to think of myself as a connoisseur of comic books. Now one comic book in particular that I have found to be very interesting is The Punisher by Marvel Comics.

The Punisher is about a former soldier whose family was massacred by the Mafia. Since that time, he has carried a very effective one-man war against crime.

In the last few years, The Punisher comic book has been the showcase of, shall we say, repulsive actions, all viewed in living color including but not limited to:

Eviscerations (i.e. disembowlements), cannibalism, rapes, immolations (i.e. setting people on fire), close-ups of violent shootings, death by snakes, piranhas, sharks, polar bears (the scene in which the polar bear swipes the man's head clean off was simply incredible), beheadings, the destruction of an entire island by a nuclear bomb, a tossing of a gangster from the top of the Empire State building (in the full view of a young teenager who got super excited over it), testicular castrations . . .

I think you get the picture.

But not once, I repeat, not once have any religious right group  raised anything resembling anger, outrage, disgust, or downright shock over any of these things.

But these groups are crying bloody murder now and you know what they are angry about?

The wedding of a gay superhero, Northstar,  to his boyfriend in another Marvel comic: 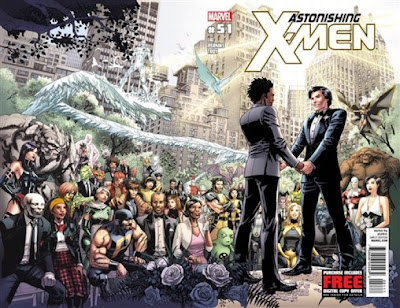 From that lovely bastion of phony news, One News Now:

Pro-family groups are outraged by the recent announcement about plans for some comic book super heroes to embrace alternate lifestyles.

. . . Focus on the Family's Glenn Stanton, director of family formation studies, says it is "shameful" to press this issue upon children.

"What's really disturbing about this is the real arrogance of these cartoon creators who think their job is not just to entertain, but to indoctrinate, to preach at us," he observes. "We go to church to be preached at; we don't go to comics to do that. And again, it's just arrogance on the part of these creators."

He also dubs it a political move. "It's kind of activist comic books, which we don't need. Comic books are for entertainment; they're not for activism, social activism," Stanton contends.

. . .Monica Cole of OneMillionMoms.com, an advocacy branch of the American Family Association, agrees.

"DC Comics and Marvel, they have an agenda, and it's to indoctrinate children at a younger age," she laments. "And they're doing it. They're being successful at it."


Now I usually end a piece like this with a quirky comment, but I don't think I need to.

Sometimes the idiocy of the religious right speaks very well for itself.

'By all means, discriminate against gays' and other Monday midday news briefs

Something to listen to when you go to the bathroom:

A Win for Gay Mothers in New Mexico - More good news for our community.

Protest Held At "Ain't No Homos" Church - Regardless of what members say in public, I bet that church is hating that child's song now.

Lawsuit - Doctor refused to treat HIV-positive patient and insulted him

There has been a lawsuit filed in New Jersey which should send a chill up the spine of members of the lgbtq community.

According to Courthouse News Service:

A gay HIV-positive man says in court that a hospital denied him treatment and visitors, as the doctor remarked, "This is what he gets for going against God's will."

Joao Simoes sued Trinitas Regional Medical Center in Union County Superior Court. He says that the hospital admitted him in August 2011, but that "requests for his lifesaving medication were not honored," and his sister was denied visitation rights.

Susan V. Borga, M.D., from the Department of Behavioral Health and Psychiatry, allegedly approached Simoes while he was confined to the hospital's mental health wing. Borga is not named as a defendant.

Simoes says Borga was unfazed when another patient told her that he had just gotten out of prison, where he served time for murder. But her reaction was allegedly different when Simoes said that he did not work because he planned to go back to school and because of his HIV status.

Borga then allegedly asked Simoes how he got HIV, to which he responded, "I got it from unprotected sex."

The complaint then says that "Dr. Borga closed the plaintiff's file, put it down and looked at plaintiff with disgust on her face and asked, coldly, "Is that from sex with men?"

Simoes says he responded affirmatively and that, "immediately after hearing this, Dr. Borga proceeded to exit the room."

After this consultation, no nurse or doctor came to see Simoes, even though he told them that he needed to take his HIV medication, according to the complaint.

When the hospital finally permitted Simoes to call his personal physician on the third day of his stay, he learned that the doctor had already spoken with Borga about Simoes' medication, according to the complaint.

Borga allegedly responded: "You must be gay, too, if you're his doctor."

More to the story here

If true, this awful story in itself highlights the blatant disrespect that some gays fear that they will face from physicians if they are out. Studies have shown that fear of stigma play a huge stumbling block in the successful treatment of gay men in combating disease, especially AIDS:

One study found that participants who reported high levels of stigma were more than four times more likely to report poor access to care.16 These factors all contribute to the expansion of the epidemic (as a reluctance to determine HIV status or to discuss or practice safe sex means that people are more likely to infect others) and a higher number of AIDS-related deaths. An unwillingness to take an HIV test means that more people are diagnosed late, when the virus has already progressed to AIDS, making treatment less effective and causing early death.

An even more noxious notion is the simple fact that not only does stimga play a role in the spread of AIDS, but when phony experts like Peter Sprigg from the Family Research Council cite the numbers of gay men with AIDS, they will blame the sexual orientation of these gay men as causing the diagnosis, while deliberately omitting how prejudice and stigma plays a part.

Posted by BlackTsunami at 6:22 AM 8 comments: