Fischer: Gay Activists Should Support Russia's Anti-Gay Laws In The Name Of Diversity - Oh yeah. Support getting your ass kicked and being imprisoned simply for your sexual orientation "in the name of diversity." I don't think science has discovered the species of hate which embodies Fischer's psyche.

Black Conservative Summit boasts multiple speakers who blame Satan for gays, LGBT rights - Apparently there is going to be a "black conservative summit" addressing ways to fight lgbt equality starring the usual cast of characters of anti-gay black activists. First item on the agenda - "how to get more money from these white religious right groups who's paying us to do this shit."

California Catholic School Fires Gay Teacher For Marrying Partner - Obviously they are angry at him for breaking the "lonely, struggling with his faith and will never get a man" gay guy stereotype.

Rhode Island same-sex couples line up to get married

Yesterday, I featured gay couples in Minnesota who got married. It's only fair that I show gay couples in Rhode Island who also were able to get married. From Buzzfeed comes the following image: 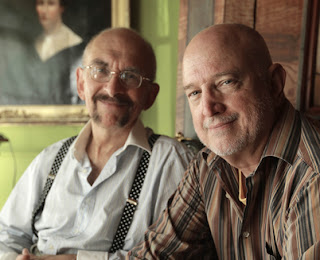 This is John Gacher and Federico Santi of Newport , R.I. and apparently they have been together for 41 years before finally being able to "make it legal." Don't tell the religious right, thought. It would just ruin their day.