A preview of 'How They See Us: Unmasking the Religious Right War on Gay America 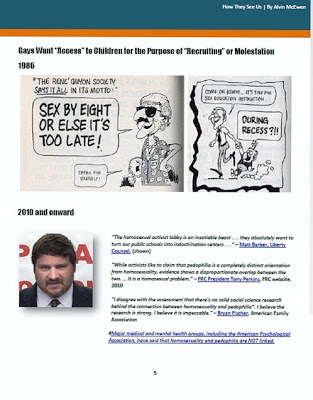 Tomorrow morning at  8 a.m., I will be publishing what I hope to be a definitive work analyzing religious right propaganda.

How They See Us: Unmasking the Religious Right War on Gay America pushes a simple premise - the claim by organizations like the Family Research Council, the National Organization for Marriage, Focus on the Family, etc. that they operate to preserve Judeo-Christian values is a lie. The truth is that through spreading anti-gay propaganda which has absolutely nothing to do with religious beliefs, these organizations stigmatize the gay community and falsely label homosexuality as a threat to societal order and wellness. And what’s worse, they use the religious belief which designates homosexuality to be a sin as a free license to sugarcoat their tactics as mere “expressions of their personal religious beliefs” and labeling every question regarding these tactics as an “attack on their religious liberty” or an attempt to "silence" them.

In reality, it's nothing new what they do and there is nothing nothing Christian or moral about it. When any group spreads propaganda, it’s always “in defense” of something and it usually scapegoats a group undeserving of such hostilities. Whether it be the defense of “Southern culture,” the “German homeland,” or “Judeo-Christian values,” it all adds up to the same thing - isolating an innocent group as the essence of evil and claiming that if only said group were put in its place, the world would be a better place. It’s a big lie and unfortunately, no one tells the lie better than religious right groups.

And it's high time that the gay community demand a public discussion on these lies. Let's hope that tomorrow will be the beginning.
Posted by BlackTsunami at 3:10 PM 1 comment:

Neil Patrick Harris' Super Bowl Ad Slammed For 'Pushing Gay Agenda' On CBS - Don't these idiots have anything better to do?

SPLC designated hate group thinks lesbian PFLAG mom is 'emotionally manipulative'; relatedly, down is convinced it is up - Hypocrisy defined. Religious right groups whine how marriage equality will cause problems for "innocent" people. But then they denigrate folks who speak FOR marriage equality.

Dobson on Obama's Reelection: 'Nearly Everything I Have Stood for these Past 35 Years Went Down to Defeat'- Dobson has a way being a little TOO melodramatic. The lesson here is that it's 2013, not 2004 and he doesn't have as much power as he did back then.

Coming on this afternoon on Holy Bullies and Headless Monsters - Tomorrow is the day in which history will be made! How They See Us: Unmasking the Religious Right War on Gay America will be published and posted on this blog. This afternoon will feature a blog post telling you what to expect tomorrow morning and maybe a preview of How They See Us. Look for it!
Posted by BlackTsunami at 8:54 AM 1 comment:

Just when you think you have heard it all from the American Association's Bryan Fischer, he comes up with another one. I swear someone should follow this man around with a tape recorder and instead of giving good points regarding the necessity of gay equality, just let the tape play.

Posted by BlackTsunami at 4:47 AM 5 comments: