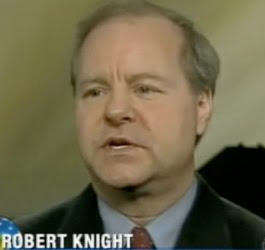 Just  as in the case of George Rekers, not too many people are in the know about Robert Knight.

Knight has had a history as long as Rekers when it comes to demonizing and stigmatizing the lgbt community. Whereas Rekers created the junk science in the background, it was Knight standing in the foreground on the talk shows, in debates, and in front of Congress repeating the junk science.

Don't get your hopes up. I sincerely doubt that he will be caught in a scandal with a "luggage lifter" any time soon.

With Knight though, there is no need to look for hypocrisy in his personal life in order to cast doubt on his credibility. His words alone are enough to do that.

Gone are the days when Knight helped create anti-gay legislation as a member of the Family Research Council or repeated false data as a member of Concerned Women for America.

These days one can find Robert Knight spouting the same nonsense about lgbts but as a writer with Coral Ridge Ministries, a far cry from the limelight he once held:


This week, their (homosexual activists) target is the military. Soon, it will be passage of the Employment Non-Discrimination Act (ENDA), which would criminalize traditional morality in every workplace with 15 or more employees. After that, they will try to overturn the Defense of Marriage Act. Finally, they aim to pass an "anti-bullying" law that will threaten schools with losing federal funds if they refuse to force kids to read Heather Has Two Mommies and Gloria Goes to Gay Pride. The agenda is breathtakingly ambitious, and would be unimaginable to previous generations.

These radical laws would be a watershed moment for socialists, who are at war with family and religion as impediments to a growing state. . .

To Knight, it's never about the fact that lgbts merely want the right to live and work freely unencumbered by people's religious beliefs or ignorant stereotypes. To him, it's all about a nefarious plot to destroy "traditional values."

It's a talking point that Knight should be used to. This is what he said in 2003 about Nashville’s attempt to add sexual orientation to its non-discrimination code:

Few public officials and businessmen realize that when they allow the addition of “sexual orientation” to their nondiscrimination codes, they are tying their own hands when it comes to objecting to:

· A man in a highly visible sales job coming to work in a dress and high heels;

· A woman in a highly visible position coming to work in men’s clothes;

· A person of indeterminate sex who insists on using either the men’s room or the women’s room;

· A person of either sex who indulges a taste for extreme sexual promiscuity and pornography during working hours despite being charged with representing the company’s tone and character;

Also, according to the site Wired Strategies (see section called  Gays are diseased, die early, and are less productive than heterosexuals) Knight freely cited discredited researcher Paul Cameron in front of Congress in a past attempt to defeat the Employment Non-Discrimination Act (ENDA):


“homosexual behavior is extremely unhealthy, contributing to the spread of AIDS, hepatitis A, B and C and other sexually transmitted diseases….A study of more than 6,400 obituaries in homosexual publications reveals that homosexuals typically have far shorter life spans than the general population. Other reports indicate that homosexuals are more likely to have drug and alcohol abuse problems. It is unfair to force businesses to pay the extra insurance expense and lost productivity that inevitably results from homosexual behavior.” [Editors note: the source for this "research" is the discredited Dr. Paul Cameron - see below for extensive information about his extreme beliefs]

Knight's newest column can be viewed as infuriating if it weren't so pitiful. Usually when someone tries a comeback, he does something new instead of the same old stale nonsense.

But I guess when lies are all you have, you really can't do anything else.