'Interfaith' website lies about SPLC and its hate group designations

An "interfaith" site, Beliefnet, has weighed in on the controversy regarding the Southern Poverty Law Center and its labeling of several religious right groups as anti-gay hate groups.

But the site is very deceptive in terms of what it chooses to highlight . . . and omit.

Why would anybody accuse 13 Christian organizations, including the American Family Association and Tony Perkins’ Family Research Council, of practicing “hate?”

. . . Could the intent be to smear and silence some of the most effective Christian ministries in America? To blacken their names because they have dared to speak out in the political battle over same-sex marriage?

When a smear campaign against the Family Research Council began last year, it was immediately denounced by Speaker of the House John Boehner and 150 other national leaders, including 24 members of Congress.

. . . That time the smear was led by the Southern Poverty Law Center, which for years has pursued anti-discrimination cases. It received considerable well-deserved publicity for suing the Ku Klux Klan and other white supremacist groups.

However, the SPLC in recent years has taken up the same-sex marriage cause and the battle against “don’t ask, don’t tell” in the military.

In late December 2010, the center advised the national press to shun 13 Christian groups because they were hate groups. Among the groups smeared were the American Family Association, the Family Research Council and the Traditional Values Coalition. The smaller groups included Abiding Truth Ministries of Springfield, Massachusetts; the Chalcedon Foundation of Vallecito, California; and the Faithful Word Baptist Church of Tempe, Arizona.

That's the tone of the article - i.e. SPLC is trying to "silence these groups because they are standing up against the supposed "gay agenda."

A couple of years ago, Oklahoma legislator Sally Kern said that the supposed "gay agenda" was as bad as terrorism and caused a media firestorm.

Unfortunately, very few on our side handled the controversy in a way which I felt was beneficial to the community. First folks made awful personal comments about her, then some of us waited until Ellen DeGeneres had something to say before we weighed on. Lastly, a lot of us focused on whether or not her son was gay.

And Kern stood above it all in false piety while repeating some of the most ridiculous lies about our community, which no one called her on.

The culmination was a huge astroturfed event held by those on the right - especially Peter LaBarbera - calling her a hero for "standing up to the supposed radical gay activists."

As stated before, I was not happy at how many of us acted during that time. The point we should have made was the danger in the fact that a legislator with voting power in state government could be so ignorant.

However, we missed the boat in making that point.

Thank goodness, however, for Kern's ego because it has given us a second chance. She took the liberty to write a book with a ridiculous title (The Stoning of Sally Kern) which revisited the controversy, thus presenting another chance to demonstrate to folks just how clueless she is.

And thanks to Alan Colmes, we now see this cluelessness on full display.

In an interview with him, Kern reveals herself to be not a Christian woman, but a very dim individual whose religious beliefs consistently leads her down a path of noble stupidity - an oxymoron if there ever was one.

Listen to the entire interview if you like or fast forward to 11:00 for some very hilarious stuff about gays and the closet.

It just goes to show how quickly false piety disappears when confronted with logic.

Posted by BlackTsunami at 2:23 PM 2 comments: 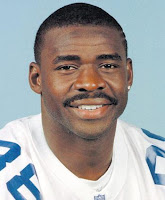 Former Dallas Cowboy football player and Hall of Famer Michael Irvin is on the recent cover of the gay magazine Out. In the magazine,  he talks about his late gay brother and defends marriage equality.

As an African-American, Irvin has a special message to his community:

Kudos to Mr. Irvin. Now I will wait to see if anyone bends over backwards to mention how Irvin's words are "free speech" like some did when David Tyree spoke against marriage equality.

If you haven't seen this video, then you should. Excellent job by one of my mentors Wayne Besen and the folks at Truth Wins Out for their excellent work on Michele Bachmann!

Bachmann Tried To Pass State Law Protecting Ex-Gay Therapists - And the plot thickens, which is a real shame to a degree. I was kinda hoping that Bachmann would get the Republican presidential nomination.

Yes, We Exist. And So Does Our Past - An awesome piece which explains why it is so necessary for lgbtq history to be taught and remembered.

NY Broome County Clerk Resigns Over Same-Sex Marriage, Cites Biblical Law - She did the right thing. If she can't perform her duties, she should resign.

Posted by BlackTsunami at 9:37 AM No comments:

I think it's safe to say that a wearing a crucifix would be very apropo when coming anywhere close to this bunch.