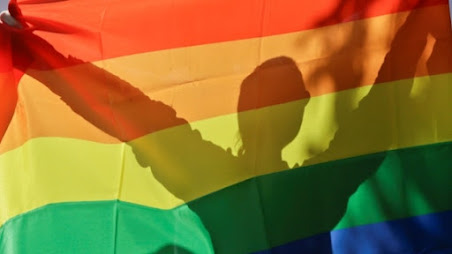 About 100 activists lined the sidewalk outside of Hamburger Mary's, an LGBTQ-friendly restaurant in downtown, Sunday to stand against a handful of anti-transgender protesters from North Texas who came to demonstrate outside a drag show at the restaurant.
The dozen or so protesters with Protect Texas Kids, a group that claims children are being “indoctrinated” by gay and transgender activists, were largely drowned out by boos and chants from the counter-protesters who vastly outnumbered them. “Stop the hate, stop the fear, everyone is welcome here,” the crowd chanted. Soon after the protest started, a small group of men, some of them wearing Nazi regalia, arrived to join the anti-trans protesters, shouting homophobic slurs and Nazi slogans across Prairie Street.
. . . Outside the restaurant on Sunday, the 100 or so counter protesters danced along to the disco and funk music booming from Hamburger Mary's, holding up large cloth banners to protect patrons from view and cheering when some of the performers came out to take pictures. The anti-trans demonstrators and counter-protesters lobbed insults at each other from across Praire Street, but the standoff never amounted to a physical confrontation.
(Kelly) Neidert, a well-known conservative activist, said her group traveled from the Dallas-Fort Worth area, to denounce a performance that she acknowledged was taking place at a privately-owned business, but one that she said was “inherently sexual.” “I don’t think parents should be allowed to take their kids to these events, and I think that there should be a law banning it from happening,” Neidert said.
The anti-trans demonstrators left Hamburger Mary’s after about three hours, followed shortly after by the counter-protesters. For the counter-protesters, their large turnout, compared to the paltry showing from the anti-trans demonstrators, was proof that Houstonians would not abide hate.

Posted by BlackTsunami at 4:53 PM No comments: