This is flying under the radar (except for in religious right circles) but it is possibility that we will be hearing more about it:

From The Tampa Bay Times:

An Orlando-based religious liberties group has filed a complaint against a Hillsborough County high school teacher, accusing her of denying student rights to religious expression while promoting an LGBT agenda.

In a letter to Hillsborough schools superintendent Jeff Eakins, the Liberty Counsel alleges that Riverview High math teacher Lora Jane Riedas barred at least three students from wearing Christian crosses on necklaces in her classroom, claiming they are "gang symbols." The organization also claims Riedas takes part in LGBT political activism in the classroom. "Ms. Riedas clearly seeks opportunities to engage in GLSEN-directed classroom activism, which has called on teachers to use its "Educator Guide" to promote GLSEN's views about homosexuality and gender confusion on "Day of Silence," and to do so this Friday, April 21, 2017," Liberty Counsel president Mat Staver wrote in his letter.


The school district is investigating the case and the principal has said she has not received any complaints from any parent or student.

Needless to say though, the anti-lgbt group American Family Association's phony new source, One News Now published a one-sided article about the situation, practically allowing  Staver of the Liberty Counsel to spin all sorts of charges against Riedas:

"What we have here are two lesbians that are promoting and indoctrinating the LGBT agenda in the classroom to their students," Staver tells OneNewsNow. "Punishing those that don't agree and targeting Christians because they won't accept her radical lesbianism."


And just in case you are not clear as to where One News Now's sympathies lie, the publication is also running a poll on the controversy: 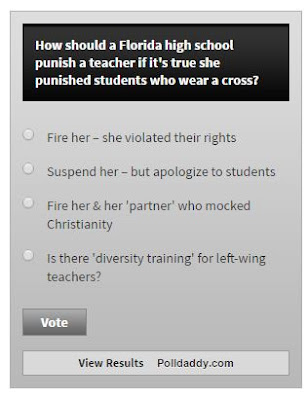 So basically, the Liberty Counsel and One News Now is attempting to spin this situation into one in which an "intolerant radical lesbian teacher made Christian children remove their crosses while in her classroom."

That rendition tends to play better should Fox News's resident religious right liar - Todd Starnes, decides to push the story further, or the Liberty Counsel needs to exploit the incident for fnndraising, or GOP Congressional leaders need another "reason" in their quest to get Trump's signature on an anti-lgbtq "religious liberty" executive order.

But there are some who smell a rat in the entire situation. In the words of People for the American Way's Right Wing Watch:

This story . . seems a lot like the phony tales of supposed anti-Christian persecution that Religious Right groups are always ginning up.

How Many Myths Of Anti-Christian ‘Persecution’ Can Kelly Shackelford Cite In One Speech? At Least Three

No, This Air Force Sergeant Was Not Fired For Opposing Marriage Equality
Posted by BlackTsunami at 5:29 PM No comments:


Republicans in Congress push for religious liberty executive order - If the religious right were smart, they wouldn't be pushing so hard for it. It's beginning to look like to me that the wish for "religious liberty" as they want it is a classic case of "be careful what you wish for because you might just get it." Once the repercussions come for secular businesses having license to discriminate against lgbtqs, there will be some VERY unhappy folks. And Trump is no fool, at least for now. The protests against his immigration nonsense would pale compared to the hell this sort of thing would unleash. Cause you know when it comes to expressions of outrage, the lgbtq community don't play.

'In the name of Jesus' the religious right have become Trump apologists & bootlickers - My post from last night which shows how low the supposed Christian right will stoop to kiss up to Trump so that he can give them what they want. See the post above.

Study: Trans and Cisgender Kids Aren’t That Different - Not a surprise. Children who are given love and support generally turn out okay.

Gay Men Sound Off On Misconceptions About ‘Femme’ And ‘Masc’ Stereotypes - This is some fascinating stuff. We do need to talk about images in our community.

This Is What Happened To Gay People In The Military Before The Ban Was Lifted - One complaint I have about my lgbtq community is how we should do more to remember our history . . .
Posted by BlackTsunami at 9:10 AM No comments: