In tribute to all of the gay and lesbian couples getting married in New York this weekend, I am reposting this piece: 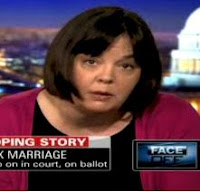 We all must recognize just how the National Organization for Marriage uses empty and repetitive talking points against marriage equality.

But let's also have a little fun with it. From various press conferences and interviews, I have gleaned a little drinking game which can be played whenever an interview is conducted NOM's Maggie Gallagher or Brian Brown, or when the organization holds a press conference. It's a minor drinking game - goodness knows that NOM has probably caused enough lgbtqs to drink as it is - so bear with me and feel free to add more categories (but no being mean).

When either Gallagher or Brian Brown claim that marriage has meant the same things to all civilizations throughout history.

When the phrase "marriage is unique and special" is used. Or when the statement "only marriage can connect parents with children" is used.

When the phrases or words  "redefine marriage, "profound consequences," or "Massachusetts" are mentioned.

When either Gallagher or Brown introduces the word "bigot" into the conversation.

When there is one African-American or Hispanic participant at a NOM press conference.

Brown or Gallagher talks about children being "taught" homosexuality

When an anecdote about "religious persecution" because of marriage equality is brought up by Gallagher or Brown without any other information as to the truth of said anecdote.

When it is mentioned that the "overwhelming majority of Americans in over 30 states voted against marriage equality."

Whenever Gallagher, Brown, or anyone else mentions how marriage is the "uniting of the two great halves of humanity."

NOM's Brian Brown vs. Rev. Al Sharpton - it's not even a contest