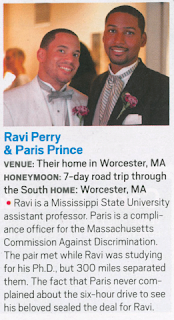 Yesterday, I posted a piece about how JET Magazine published a wedding announcement of a gay couple.

Today, the African-American online magazine, The Grio, posted an article about the announcement and needless to say that it has caused an excellent discussion in the comments section below the post. I suggest that folks read what is said because it totally disproves a lot of notions about "African-American homophobia."

Granted, there are some folks who voice their disagreement with JET, but for the most part, there is a large amount of support to not only JET but the gay couple.

Read it here.
Posted by BlackTsunami at 2:50 PM 2 comments:

YourHolidayMom.com Offers Messages Of Acceptance And Hope To LGBT Youth During The Holidays - A new website features 40 mothers giving messages of holiday hope and acceptance to our lgbt children. Excellent idea and I am honored to publicize it.

Ex-Straight Therapy: It Works, and I Am Proof! - My ex-straight therapy consisted of three Joan Crawford movies.

Joni Lamb and Janet Boynes describe Homosexuality as Satan's Trap - No. The Jersey Shore and cellphones are actually Satan's trap. Everyone knows that.
Posted by BlackTsunami at 8:49 AM No comments: 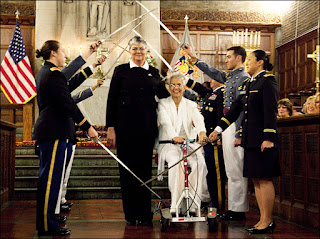 Who would think that one little wedding would give so many religious right members such a huge stomach ache?

According to the AP:


Cadet Chapel, the landmark Gothic church that is a center for spiritual life at the U.S. Military Academy at West Point, hosted its first same-sex wedding Saturday.

Penelope Gnesin and Brenda Sue Fulton, a West Point graduate, exchanged vows in the regal church in an afternoon ceremony, attended by about 250 guests and conducted by a senior Army chaplain.

The two have been together for 17 years. They had a civil commitment ceremony that didn't carry any legal force in 1999 and had long hoped to formally tie the knot. The way was cleared last year, when New York legalized same-sex marriage and President Barack Obama lifted the "Don't ask, don't tell" policy prohibiting openly gay people from serving in the military.


Naturally, members of the religious right are going apoplectic.

Pat Robertson commented on the wedding in his usual nonsensical way, whining about how several generals, such as Douglas MacArthur, Ulysses S. Grant, and Robert E. Lee are "rolling over in their graves":

And not to be outdone, the Family Research Council had to get a word in:

Army officials are experts at following orders--except when it comes to federal marriage law. For the second time in two weeks, the brass at West Point opened its gates to lesbian "wedding" ceremonies in direct defiance of the Defense of Marriage Act. Adding insult to the law's injury, Saturday's service was held in the Cadet Chapel, a 176-year-old house of worship that has been the heartbeat of the Academy's Christian community for almost two centuries. Brenda Fulton, one of the "brides," said the Chapel was a particularly meaningful site, because it's where she first heard the Cadet Prayer: "Make us to choose the harder right instead of the easier wrong"--words that, in the end, even West Point failed to live up to. Fulton and her same-sex partner marched down the aisle knowing full well they were leading the military's own processional away from the rule of law. "The liberal social experiment with our military continues," said a frustrated Rep. John Fleming (R-La.) in June.


The fact that FRC had to reach far in the past to get a doom-ridden quote should give you an indication of the difficulty the organization had in making this non-controversial story into something dire and huge.

But you have to give FRC  ome pity points for attempting the moral panic. The organization's post was accompanied by the following graphic: 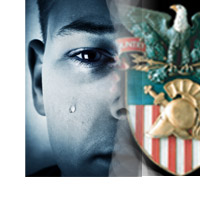 Lighten up, folks! It was a just a wedding. You know, a joyous occasion.

I guess for the rest of us who are happy over the blessed event - specifically the brides - it's a case of mind over matter.

Those who mind don't matter and those who matter don't mind.

So, FRC and Mr. Robertson, I guess you don't matter.

Posted by BlackTsunami at 4:37 AM 6 comments: