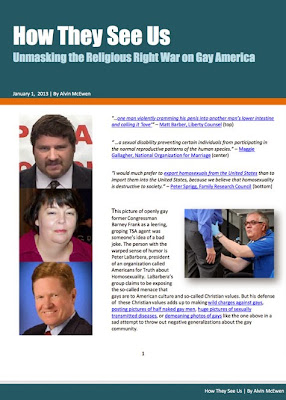 The first experience South Carolina blogger Alvin McEwen had of hanging out with a group of gay men was not a good one.

“It was one of those college groups devoted to give gay men a place to talk and be out of the closet.  When I walked into the room and sat down, I immediately took off my glasses so I couldn’t look any of them in the face. That’s how ashamed I was of being gay. I had been taken in by all of the negative talk around campus and especially on television voiced by people like Jerry Falwell and Pat Robertson. It’s kind of sad how we as a community either laugh these experiences off or don’t talk about them.”

That day serves as a stark memory to McEwen 20 year later as he devotes a considerable amount of time and effort in exposing the anti-gay propaganda which once made him ashamed of being a gay man.

“No one should feel what I felt back then,” he said.

Since 2007, McEwen has been blog master of Holy Bullies and Headless Monsters, a site which focuses on refuting anti-gay propaganda spread by religious right groups.  However late last year, Mc Ewen felt as if he was in a rut. He felt that he was going nowhere constantly refuting anti-gay propaganda only to hear religious right spokespeople repeat the propaganda. He asked himself many times just what good was he doing.

McEwen also felt that there needed to be something which put religious right propaganda in a new perspective. In  January of this year, he published an online booklet entitled How They See Us: Unmasking the Religious Right War on Gay America. 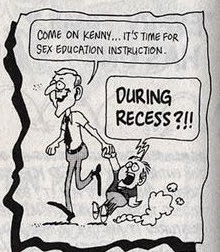 propaganda, including claims that a large number of pedophiles are gay or gay men have a very high number of sex partners – but with an original twist. Instead of writing long-winded refutations, McEwen used the graphic images created by anti-gay groups and words uttered by their spokespeople to demonstrate just how ludicrously wrong their claims are. In addition, he also traced the multiple times in which researchers have cried foul over the distortion of their work by anti-gay groups.

“The point of How They See Us is simple,” McEwen said. “Religious right groups today are constantly spinning tales of gay calamities and horror stories. Then they hide behind the idea of ‘deeply held religious beliefs.’  But I found proof from 1986 which demonstrates that it’s all a big lie designed to exploit religious beliefs and fears.” 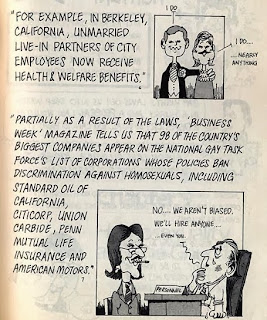 The proof McEwen speaks of is a 1986 anti-gay comic book which was endorsed by a former Congressman, William Dannemeyer, and Beverly LaHaye, founder of the anti-gay group Concerned Women for America. The comic book which makes up a large part of his booklet , contradicts any claim one hears from anti-gay groups that they are acting in “Christian love.” McEwen takes various images from the comic book and compares it to present day religious right rhetoric about gays, proving that there is no difference between the two.

“Graphic images of hate just gave way to words of hate,” McEwen said, “and none of it is Christian.”

When it was first published, How They See Us caught the attention of a few lgbt bloggers as well as  several lgbt and progressive news sources, yielding some attention. When this attention died down, McEwen began an aggressive Facebook and twitter campaign in order to keep the booklet in the public eye.  This campaign has paid off.

However, the progression of How They See Us has not been smooth. One problem McEwen had is how little attention his booklet attracted from the mainstream lgbt media such The Advocate and Out magazines and mainstream lgbt organizations such as GLAAD and HRC.

In all honesty though, McEwen really doesn’t view this as a problem.

“Gay organizations and magazines have a lot of other things on their plates, and I certainly don’t blame them for that,” he said. “Plus, I may not have been able to get away with as much as I did if I had teamed with them. I may have been forced to tone it down.”

But McEwen sees the second problem as a danger to the lgbt community. He said there seems to be reluctance in calling out religious right groups until after the fact when the damage is done.

“We don’t take care of business before these organizations get a foothold in local communities and in the media,” McEwen said. “Then after these groups have done their damage, we either gripe or attempt to cram something together. Why the hell are we waiting until they make the first move?”

McEwen attributes it to too many members of the lgbt community being extremely blasé and then raising hell when these anti-gay groups and their spokespeople are interviewed on the major news networks.

“When we hear that MSNBC or FOX or CNN will be interviewing people like Tony Perkins of the Family Research Council or Brian Brown of the National Organization for Marriage, we demand that they don’t do it on the grounds that these are hate groups. That’s a huge mistake.  Instead of saying that these organizations get no time, we should be demanding equal time. If NOM or FRC has someone on these shows, we should be demanding that representatives from HRC or GLAAD be included. We cannot begin to eradicate anti-gay propaganda until we stop running from it. We may not take it seriously, but a lot of others do and our silence only hurts us in this matter.”

How They See Us is free to the public and McEwen has even emailed several adobe acrobat copies to individuals who have problems with downloading the online file. Anyone wishing to have a copy can email him at Charlekenghis@aol.com

While McEwen’s immediate goal is to attract one million readers, he has larger aspirations. He wants to transform the debate on lgbt equality.

“Why is it when there is a debate on lgbt equality, the gay community seems to always be on the defensive,” McEwen said. “We aren’t doing anything wrong. We aren’t the ones lying or cherry-picking research. The point of the debate should never be ‘why are gays deserving of this or that.’ The onus of the debate should fall on these so-called morality groups.  I would like to hear their explanations of not only why they feel that gays shouldn’t have equality, but why do they call themselves Christians when one takes into account the levels of lies and deception they engage in.”
Posted by BlackTsunami at 7:38 PM 5 comments:

Local effort to force referendum on NDO fails, not enough signatures - Was meaning to mention this earlier. This is awesome that the pro-lgbt law in San Antonio will be upheld.

Dr. Chaps Is Running For Office! - Another anti-gay pundit is running for public office. Sorry but as kinky as it sounds, I would not vote for anyone who has the nickname of "Dr. Chaps."


A third of the US population has marriage equality - Sweet!

Chris Christie Gay Marriage Move Stirs GOP - It will surprise you.
Posted by BlackTsunami at 9:20 AM No comments:

Meet the Trace McNutt, a self-described former Satanic drag queen who recently received a "Courage award" from Voice for the Voiceless, the "ex-gay" group behind the recently unsuccessful lobby day and banquet on Capitol Hill a while back.

And one more thing, according to another interview, he isn't exactly "ex-gay."
Posted by BlackTsunami at 5:00 AM 1 comment: