How should we handle Tracey Morgan's mea culpa?

For whatever reason, Tracey Morgan is extending a huge mea culpa as a result of that ugly comedy routine he did last week:

GLAAD today spoke with Tracy Morgan following anti-gay remarks made during a recent performance in Nashville, Tenn. He also spoke out in support of LGBT people, marriage equality and against anti-LGBT bullying on Global Grind.com.

During a call with GLAAD President Jarrett Barrios and members of GLAAD's staff today, Morgan committed to meet this week in New York City with LGBT youth from the Ali Forney Center who have been hurt or left homeless by parental rejection as well as family members who have lost children to anti-gay violence. Those he will meet include Elke Kennedy, the founder of Sean's Last Wish. Elke's son Sean was killed by anti-gay violence in 2007 at the age of 20 in South Carolina, when another man called him a f*ggot and punched him so hard it broke his facial bones and separated his brain from his brain stem. Since that day, Elke has traveled more than 140,000 miles to speak in states across the country about hate violence and bullying.

Together with GLAAD and the Tennessee Equality Project, Morgan has said he will return to Tennessee next week where he will apologize to audience members who were offended by his remarks. Currently, legislation in Tennessee is pending that would ban educators from speaking about gay people in the classroom.

Morgan stated to GLAAD: "I know how bad bullying can hurt. I was bullied when I was a kid. I'm sorry for what I said. I didn't mean it. I never want to use my comedy to hurt anyone. My family knew what it was like to feel different. My brother was disabled, and I lost my father to AIDS in 1987. My dad wasn't gay but I also learned about homophobia then because of how people treated people who were sick with that. Parents should support and love their kids no matter what. Gay people deserve the same right to be happy in this country as everyone else. Our laws should support that. I hope that my fans gay, straight, whatever forgive, and I hope my family forgives me for this."

"Meeting with gay and transgender youth shunned by their parents and families who have lost loved ones to anti-gay violence is an important first step. These meetings will help Tracy better understand that no one should be treated differently or subjected to violence," said GLAAD President Jarrett Barrios.

I happen to know Elke Kennedy personally and she is an excellent advocate for lgbt youth. The big question how should the lgbt community handle this situation. I know there are some of us who won't accept Morgan's apology no matter how many times he apologizes or how heart felt his sentiments are.

But I am not one of them. There has been too much nastiness and hate as it is. Morgan's comments were ugly. Anger was felt because feelings were hurt. To many of us, his words brought back ugly flashbacks of being called names, being threatened (even by family members), and even thrown out of our homes by those we thought loved us.

However, this is the time that we show that no matter what was done to us, we have retained our basic humanity and our capacity for forgiveness.

So I think there should be less "screw you and your apology" comments to Morgan and more of ways in which we can come together to gain better understanding for not only ourselves but our children.

Maggie Gallagher speaks of same-sex households with a forked tongue 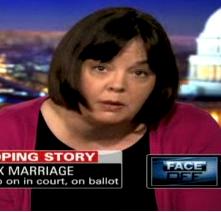 According to Jeremy Hooper, this is what National Organization for Marriage chairperson said to the Christian Post:

Gallagher comments, “Sex, babies and marriage are not just intensely personal matters – they are civilizational ones, too.” When you add children to the mix, the stakes are even higher.

“The result is a large increase in social problems, an increasingly large government that steps in to try to solve these problems, more suffering for children, and lower levels of happiness for adults, especially for women. If the trends continue long enough, it calls into question the capacity of the society or civilization to transmit itself into the future.”

But how does that gel with what she told a Congressional committee in April:

At 2:29 - 2:41 , Gallagher admits that "there are some gay people who are wonderful parents." She also says that she thinks its unfortunate that people misinterpret things she says as a condemnation of "gay people" and their parenting skills."”

Gee Maggie, maybe folks "interpret" you as having animus gay parenting because you go off on nonsensical tangents about "sexually disorganized cultures."

GOP swings both ways on gay-marriage bill - If this article is true, NOM has a lot to be fearful of.


Today's Prop 8 hearing on relevance of Judge Walker's orientation & trial video release - Some people got too much time on their hands. A gay man can't be a judge? Ridiculous.

Family Research Council sneaking misleading studies back onto its webpage

Back in late 2008, I noticed the following studies missing from the Family Research Council's webpage: Homosexuality and Child Sexual Abuse,
The Negative Health Effects of Homosexuality, and Homosexual Parenting: Placing Children at Risk

I emailed the organization and received the following response in early 2009:


The papers that you inquired about have been removed from our website indefinitely due to the fact that they have outdated sources. However, we have other resources on our website that contain similar information, such as the
following:


Why Marriage Should Be Privileged in Public Policy
http://www.frc.org/get.cfm?i=IS03D1


Comparing the Lifestyles of Homosexual Couples to Married Couples
http://www.frc.org/get.cfm?i=IS04C02


Alvin, we appreciate your interest in these important issues. Please let us know if you have any further questions or concerns.

At the time, I was disturbed by the fact Ms. Athearn did not indicate which sources were outdated because the resources she gave me contained, not similar information as the removed studies, but the same information.

That is a moot point now because the studies in question have returned to the FRC webpage, albeit secretly.

Read more »
Posted by BlackTsunami at 4:59 AM 2 comments: