The anti-gay group Concerned Women for America is furious at the National Women's History Museum Project. According to Right Wing Watch, the group is especially angry that there is no mention of religious right activists, particularly its founder, Beverly LaHaye.

On that score, I say that Concerned Women for America has a point. LaHaye should be mentioned. But not in the way the organization thinks she should. No doubt, CWA would like LaHaye to be mentioned as a champion of so-called "traditional values" and the family.

However, I have a much better item which perfectly captures LaHaye's contribution to American society: 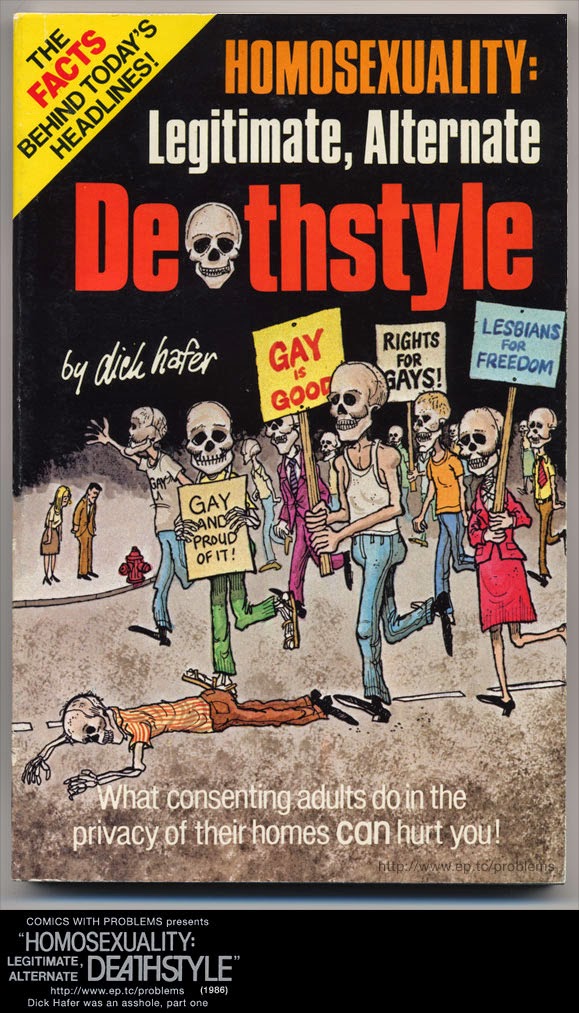 Readers of this blog should be familiar with the above booklet.

Baby dies after being taken away from lesbian couple days before adoption - There are simply no words for this.

Church Files Suit For Right To Perform Same-Sex Marriages In North Carolina - I like this twist in the marriage equality argument.

A Response to Rev. Franklin Graham - A well-deserved smack in the face to homophobia hiding itself behind religious beliefs.

Brendan Eich vs. Donald Sterling - Is there a difference?

I was going to write about this but John Aravosis on Americablog articulated this point so well that I will post a little of what he said instead:

It was only a few weeks ago that America was lecturing the gay community about its intolerance for intolerance, for objecting to a bigot (in fact, an anti-gay activist, Brendan Eich) running a major American corporation (in this case, the Mozilla Foundation).

Republicans, including gay conservatives, were particularly upset that anyone would judge a man’s job performance, especially the man running a company, by his personal animus towards minorities, many of whom would be his own employees.  So long as he didn’t discriminate against his own employees, he was free to be a bigot, they told us.

.
Today, even conservatives are saying (on CNN) that the NBA simply must investigate whether the owner of the Los Angeles Clippers basketball team, Donald Sterling, made racist remarks to his girlfriend, who is black and Mexican.

. . .  It was only a hypothetical less than a month ago – the question, “what if” the guy running the company were a racist, or an anti-Semite?  . . .  No one is running to Donald Sterling’s defense (though Cliven Bundy, another forgotten “free speech hero,” has yet to weigh in).  No one is defending America’s “proud tradition” of defending the employment prospects of avowed racists.  Nor should they.  And even if, as Sterling alleges, the audio is a fake, America’s reaction to the audio was authentic, and universally critical.


Aravosis raises some good points and they deserve a lot more thought and discussion.
Posted by BlackTsunami at 5:07 AM No comments: