People have said no matter how low Trump goes, he never hits bottom. There is always level he is willing to stoop. That characteristic obviously goes for the evangelicals who defend him.

Rev. Franklin Graham has come out with a statement about Monday's event in which unarmed protesters and priests were tear-gassed so that Trump could have his picture taken holding up a Bible in front of a church. And it leaves me confused as to whether or not Graham is getting senile or he decided to outright lie.

I was asked if I was offended by the President walking out of the White House, which is his back yard, and walking over to St. John’s Church. Offended? Not at all. This made an important statement that what took place the night before in the burning, looting, and vandalism of the nation’s capital — including this historic house of worship — mattered, and that the lawlessness had to end.

And I’m not offended that he held up the Bible — as a matter of fact, I was encouraged! I appreciate it. I believe that God’s Word is the only hope for each individual and for our nation. The problem we are facing in this country is a spiritual and moral problem. New laws and more government give-away programs are not the answer. It’s a heart problem, and only God can change the human heart.

I’m disappointed that some of the President’s harshest critics about going to the church were clergy. They have publicly (to the media) criticized the President for walking to the church and for holding up the Bible. That’s unbelievable. They should be thanking him rather than criticizing him! They are nitpicking his gesture, also saying he should have prayed while he was there. So critical. Well, maybe they should invite him back and pray for him as he leads this country through a very difficult time in our history.


Oh my God? What the hell was that? Graham doesn't simply defend Trump. He totally gaslights his readers about the incident. The entire article is a master class in deception even down to the picture accompanying it, which does not show Trump holding up the Bible (probably because he held it upside down)

Read more »
Posted by BlackTsunami at 3:54 PM No comments: 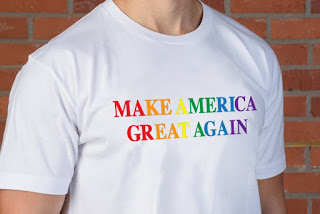 President Trump misses Pride Month for third time - And we are surprised because . . .


Trump refused to issue a Pride proclamation. He’s selling Pride campaign t-shirts instead. - He does this because he thinks he can get away with it.

Cuban LGBTQ activists and media correspondents harassed with death threats - The struggle is real and it's worldwide.


Posted by BlackTsunami at 9:06 AM No comments: