While the religious right have been silent - no doubt in shock - over the news that over 75 prominent Republicans signed on to a brief asking the Supreme Court to overturn Prop 8, the Republicans in question haven't been so silent. The following is a New York Times interview with one of the Republicans, Margaret Hoover:

The National Organization for Marriage takes the cake with this nonsense: 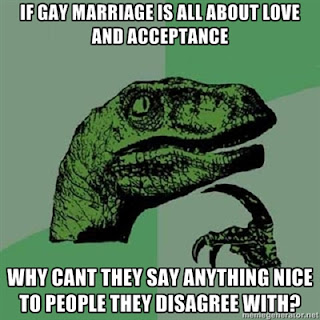 Perhaps the denizens of NOM are living in a bizarro universe because the following statements have not come from supporters of "gay marriage" (marriage equality):

"The idea of same-sex marriage is troubling even to some homosexuals, let alone those who hold a biblical conviction that marriage is intended by the Creator to be between a man and a woman. . . Every time Western civilization seems to reach the bottom, one discovers a new low even farther down the pit. If Western populations don’t wake up, before long they will find themselves all the way in the Lake of Fire with the devil laughing his head off". - Michael Youssef, televangelist

"This is a really pernicious lie of Satan to say that the gender part of humanity doesn’t really matter because the gender part of humanity is really denying the distinct God imaging in each of us as males and females. We need to understand that as Christians. That’s the biggest thing. The other is that, ‘you know kids don’t really need a mom and a dad they just need any configuration of loving adults who care for them,’ in fact, and this has already been in the case, we all know about what hate speech is, the fact of saying a child needs a mother and a father will be deemed hate speech because that is a statement against same-sex marriage and parenting." - Glenn T. Stanton, Focus on the Family

"We need to remember that in the time leading up to the Flood what the rabbis teach about the last straw for God before He brought the Flood was when they started writing wedding songs to homosexual marriage and Jesus said that you’ll know the End Times because it will be like the days of Noah. There’s never been a time in the history of the world since before the Flood when homosexual marriage has been open and celebrated, and that’s another sign that I believe that we’re close to the end." - Scott Lively (Editor's note - there is NO verse in the Bible which validates Lively's assertions regarding marriage equality songs and Noah's flood).

Scores Of Republicans Sign Legal Brief Supporting Gay Marriage Ahead Of Supreme Court Argument - This story practically blew up my twitter and facebook last night. For that reason, it needs a repeat for those who haven't heard about it yet.

Student Suspended For Participating In ‘Day Of Silence’ Sues School - Oh this is gonna be good!

Fischer: 'There Is No Right to Engage in Immoral Behavior' - Bryan Fischer is talking about sex again. Whoop te do.

TWO Slams Quack Therapist Christopher Doyle For SPLC Hit Piece In The Christian Post - SPLC is really getting on the nerves of the anti-gay industry. Good!

Posted by BlackTsunami at 9:12 AM 4 comments:

One has to give anti-gay activist Scott Lively points for chutzpah.

After spending the longest time attempting to deny his involvement in how Uganda created it's "Kill the Gay" bill, Lively is now peddling the same mindset which led to the bill's creation.

In a recent issue of World Net Daily, Lively advances what he calls a theory which will ensure a "pro-family" victory. It's actually a repeat of what he wrote to Russia in 2007.

Are you ready for two of his suggestions? :

1.  . . . begin training doctors, psychologists and therapists in the techniques of helping homosexuals to recover, and offer this therapy as a public service. Promote recovery for homosexuals in public advertising and reach out to young people who may suffer from same-sex attraction. Catch it early and spare these youths a lifetime of pain and suffering. Importantly, if Russian authorities publicly promote recovery for homosexuals, the “gays” will not be able to deceive the public with their “born the way” propaganda.

2.   . . .  criminalize the public advocacy of homosexuality. My philosophy is to leave homosexuals alone if they keep their lifestyle private, and not to force them into therapy if they don’t want it. However, homosexuality is destructive to individuals and to society and it should never publicly promoted. The easiest way to discourage “gay pride” parades and other homosexual advocacy is to make such activity illegal in the interest of public health and morality.

In other words, leave gays alone. Just pass laws which make it absolutely impossible for them to function other than clandestine sexual encounters in bathrooms, rest stops, etc.  Destroy their ability to function openly in society, have public relationships, and families. Make their lives so intolerable that while you are not forcing them to seek ex-gay therapy per se, you are manipulating them in that direction.

This madness will never happen. But let's ask ourselves something. With all of the "Don't Say Gay" bills lurking about in state legislatures, the constant attacks by organizations like the Family Research Council and the National Organization for Marriage, and the attempts to allow discriminatory behavior under the guise of "religious liberty," one wonders whether or not other religious right figures and supporters are a step ahead of Lively in the idea of making the lives of gays so intolerable that we practically trip over ourselves to rush into "ex-gay" therapy.
Posted by BlackTsunami at 4:37 AM 3 comments: