How much of a two-faced hypocrite is the Rev. Franklin Graham? This much . . .

President Obama's recent visit and subsequent statement on the persecution of Kenyan lgbts have caused a lot of talk.

The Rev. Franklin Graham expressed his opinion via Facebook: 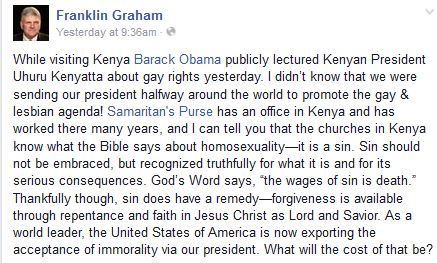 Bear in mind that Obama wasn't lecturing anyone. He was simply speaking out against the persecution of lgbts in Kenya; persecution includes a jail sentence up to 14 years for simply being gay, as well as being beaten, raped, or murdered for the same reason.

The fact that a "minister of God" is more concerned with attacking someone who speaks out against  persecution rather than the persecution itself is bad enough. But with that criticism, Graham brought new meaning to the term "hypocrite."  Below the entry chastising is this one from July 25: 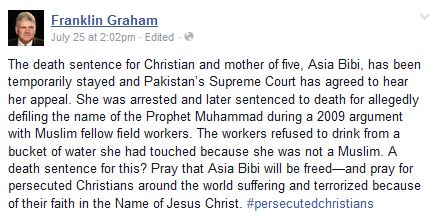 I will not play the "Oppression Olympics" here. I refuse to. Kenyan lgbts and Mrs. Bibi are both victims of persecution. There is no difference between the two situations. Except for in Graham's mind.

How can a man who claims to follow Christ speak against one form of persecution (religious) and then turn a blind eye another form. How can a man of Christ actually criticize someone for speaking up for the victims he deliberately ignores?

A better question would be does Franklin feel that lgbt Kenyans deserve to be put in jail, chased by mobs, brutally raped, or murdered because of the so-called sin of homosexuality?

If so, he is NO man of God.  What he should be called is something I will not repeat for the sake of the children and those with sensitive stomachs who read this blog
Posted by BlackTsunami at 3:19 PM 5 comments:

'Obama stands up for Kenyan lgbts, how you can help defeat 'religious liberty' lie' & other Mon. midday news briefs


Obama Defends Gay Rights on Kenya Trip - I have objected tremendously to some of the headlines and spin of this story. Obama did NOT lecture anyone regardless of what some headlines say. Nor was he smacked down. After being warned not to, Obama simply took a stand for gay Kenyans who are being brutalized and persecuted in their own country.

Welcome To Lesbian History Week - I feel embarrassed about not knowing about this. But now that I do, it's a wonderful idea for education.

The Texas Supreme Court Just Upended Houston’s LGBT Protections - What happened Friday was some bull#@!%. Even though there are clearly not enough signatures because of irregularities, read what the court said. It will get you furious.

Lawsuit Claims That People Who Want LGBT Americans Treated Equally Are The Real Bigots - This lawsuit could have a NASTY effect on lgbt equality. I would like to say that this clerk won't win, but I don't want to jinx it.

For Transgender Americans, Legal Battles Over Restrooms - An ugly battle which our transgender brothers and sisters DID NOT start but we will ALL finish it with them.

Last but not least:

I know some folks didn't get to see this morning's post. If you want to read it, go here. However to make matters simple, I announced a twitter campaign to remind folks about the reality behind the "religious liberty" argument. I developed a series of tweets featuring the words and lies of  groups and personalities behind this "religious liberty nonsense. The purpose is to educate and remind people that the "religious liberty" is merely homophobia with a soft touch propagated by folks with a long history of demonizing the lgbt community. If you don't want to read the article, then just retweet the following. They are the first in a series. Trust me when I say that they are mere "cocktail canape" when compared to future tweets I have developed:

THIS is how we defeat the 'religious liberty' lie

One thing missing from this conversation about "religious liberty" are the facts about the groups behind it. While the media and our community focuses on the clerks, bakers, and other businesses who are suddenly claiming a "God exemption" to not treat us as regular taxpayers or take our business, very few people seem to be talking about the groups and personalities who have successfully made the phrase "religious liberty" one we are all repeating.

"Religious liberty" has nothing to do with protecting people's religious beliefs.  It's merely ugly, stale homophobia in a new package. Rip that package off and you will find the same mindset of bigotry propagated by the same anti-gay groups and personalities who make their living off of exploiting that bigotry.

Last weekend, I developed a few tweets which focuses on questionable words and actions of the people and groups behind the "religious liberty" argument. The tweets also question WHY would the national GOP want to work with these individuals and groups to create a sort of federal religious liberty law.  Included is a link to my booklet where people can read more info about how these groups spread anti-gay propaganda.

By all means, please "favorite" and retweet the following below. And remember that it's only the first batch. I am presently working on the second batch and they are doozies: