Is the Liberty Counsel attempting to remake Kim Davis into the evangelical 'Nelson Mandela?'

Why Did Pope Francis Meet With Kim Davis?

Based on the two above news briefs, it's beginning to look more and more like the Pope did have a secret audience with anti-gay Kentucky clerk Kim Davis. But hold up before going off half-cocked. I love y'all, my lgbt brothers and sisters but there are times when you are quick with the outrage but slow with the thought process. Details are still coming out what exactly was the meeting about, who arranged it, who said what, or why it even happened. But I have a theory you should really think about.

Earlier this week, Davis' lawyers was claiming that 100,000 Peruvians held a prayer rally for her. They even passed along a picture supposedly proving such until the picture was proven to be from 2014. They were then forced to say the picture wasn't factual. But let's imagine for a moment that the truth about the picture wasn't discovered. With the idea fresh in our minds that 100,00 Peruvians allegedly rallied in Davis' honor, this announcement that she met the Pope who supposedly told her to "stay strong" would hit the news services.

All that would be left is someone, let's say Fox News' Todd Starnes, Mike Huckabee, or any other right-wing source like The Blaze, American Family Association's One News Now, the Heritage Foundation, etc.  to suddenly anoint Davis as the Christian "Nelson Mandela" with as much zeal as they compared her to MLK or Rosa Parks when this thing first began.

In the United States, Davis isn't exactly winning many followers for her illegal stance. However if she is seen as an international symbol for alleged anti-Christian persecution, then who cares about the United States because the hype machine would send her reputation through the stratosphere on a worldwide level, reaching people who aren't aware or don't care about the true story.  Like Nelson Mandela during his long imprisonment became the international symbol against apartheid in South Africa, she would become an international symbol of  so-called "religious liberty" or "homosexual oppression" (which by the way doesn't even exist.)

It's just a theory but definitely something to keep in mind. So I would suggest that my lgbt brothers and sisters be careful to not bare their fangs to much that they miss the con which could be done on us all.
Posted by BlackTsunami at 9:24 AM No comments: 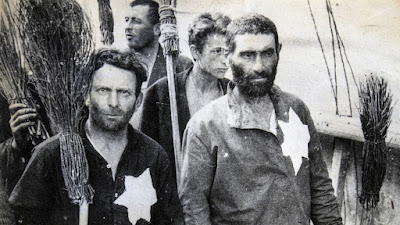 Fresh from being caught up in the embarrassment of the Kim Davis Peruvian Rally Hoax, the anti-gay publication Barbwire ran the above image to accompany the article Today It’s the Christians.

Apparently, the article is about the belief that Christians in American are entering a holocaust like the Nazis launched against people of the Jewish faith.

Whatever, guys. After the Peruvian Rally hoax, I'm not sure anyone should believe your powers of predictions.

More about the article and the person behind it, Janet Porter, here.

Posted by BlackTsunami at 5:05 AM No comments: