The annual GLSEN's Day of Silence is coming up next week and religious right groups are just chomping at the bit to disrupt it.

To the uninitiated, the Day of Silence is an annual event in which students across the country vow to take a form of silence to call attention to the silencing effect of anti-LGBT bullying and harassment in schools.

Since this event and the organization behind it, GLSEN (the Gay, Lesbian & Straight Education Network) deals with the plight of lgbt students, they both have been in the crosshairs of religious right groups who claim that Day of Silence is simply another way to supposedly "indoctrinate" students into homosexuality.

Every year, we can always count on religious right groups and spokespeople pushing hysterically false tales of alleged "homosexual indoctrination. And unfortunately, this year will be no different.

. .  for Connecticut Pastor James Loomer, protecting students wasn't on his school district's agenda. This week, at a meeting of the Milford School Board, members denied his request to stop the Gay, Lesbian, and Straight Education Network's (GLSEN) national "Day of Silence." At past events, GLSEN was caught distributing pamphlets that promote everything from child sex to pornography. "If parents [knew] the inappropriateness of the materials, they'd be enraged," Pastor Loomer said. Still, the Board wouldn't budge. They insist on moving forward with the event on April 20 in the name of "tolerance."

And if anyone should be aware of this, it is the Family Research Council.

Although FRC did not acknowledge that it had to make changes, the conclusion that the organization had pushed a false claim against GLSEN and then was forced to retreat with its tail between its legs was abundantly clear.

And yet it seems that FRC has not learned a thing from last year's humiliation because the organization is obviously looking to be embarrassed again.

Posted by BlackTsunami at 5:24 PM 2 comments:

Is Chris Matthews changing his mind about hate group leader appearing on his show?

It seems that Faithful America may be getting through to Chris Matthews in regards to hate group leader Tony Perkins appearing on his show Hardball:

Last month, some Faithful America members caught up with Chris Matthews at a book signing and asked him directly about their campaign asking MSNBC to stop booking hate group leader Tony Perkins on their network.

In that interview, Matthews initially protested but ultimately admitted that “you may be right. I may agree with you, but not right now.”

Yesterday, Matthews was asked again about the problem, and he expanded on those concessions:

MATTHEWS: Why don’t you think I should have him on my show?

Q: You said that you wouldn’t have Franklin Graham on your show earlier this year because he tells hateful lies and I was wondering if you thought that was a different standard.

MATTHEWS: Well you got to make your case, you know. I talked about this with my producers last night and we’re trying to decide how to deal with it. My view is I don’t like censoring opinion and Tony Perkins has been on this show and he hasn’t said something like that on my show, he doesn’t talk like that on Hardball.*

Q: Do you think it gives him credibility when he’s on Hardball though, for what he says off Hardball?

In what will likely come as a disappointment to the right-wing activists who have been celebrating Matthews’s comments as an endorsement of their “right” to spread lies on TV, Mathews clearly indicates that he’s taking these concerns seriously, doesn’t have a good answer, and has already begun conversations with his producers about it.

Faithful America, GLAAD and the other organizations and individuals who are working to educate the media about the problems with hosting spokespeople who tell hateful lies should take this as a sign that they’re making real progress and should keep up their efforts.

*As before, Matthews seems to have forgotten about his November 2010 show in which Perkins specifically cited debunked research to claim that gay men are more likely to molest children.

Posted by BlackTsunami at 2:37 PM No comments:

The religious right's no-good, all around bad day continues

The hacking of NOM's social network only scratches the surface when it comes the abysmal day religious right organizations are having. Several other incidents happened today which left these phony morality groups staggering. Let's look at some of them, shall we:

Researcher Robert Spitzer Retracts Landmark Ex-Gay Study - A major study which the religious right have thrown in the face of the lgbtq community as proof that gays can change their orientation as been retracted by its author. Knowing the religious right, watch how they will conveniently omit this new information while continuing to use the study.

Being abandoned by allies:

HUGE – pro-Proposition 8 witness comes out against NC’s Amendment One in N&O op-ed - How is this for a kick in the face. A witness who testified for Proposition 8 - the California law banning marriage equality - has denounced the effort by religious right groups in North Carolina to pass a similar law in that state. Good for you, David Blankenhorn.

Infighting with regards to Presidential candidates:

Perkins Accuses Romney Of Supporting ‘Special Employment Rights Based Upon Sexual Behavior’- Uh oh. On the day in which NOM endorses Mitt Romney for president, Tony Perkins of the Family Research Council throws a monkey wrench into religious right support for Romney.

NOM was hacked! See the post below this one to see the damage!

Posted by BlackTsunami at 6:06 AM 2 comments:

National Organization for Marriage apologizing for race-baiting scandal? I wish

Editor's note - It's been confirmed that the National Organization for Marriage's social network was hacked in a MAJOR way. Aw nuts! And here I thought the group had turned a new leaf. See this Huffington Post article for more details.

This morning, the gay blogsphere is all abuzz about the following which appeared on the National Organization for Marriage's Facebook page: 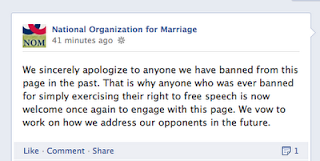 I personally thought that NOM's facebook page was hacked. But then the following message appeared on NOM's twitter page:

And now the following appeared on NOM's blog:

In the last couple of weeks you've heard some pretty bad things about this organization. I must admit that we were angered when our in house documents were released but we've since had time to reflect on the strategies we've employed to divide Americans against each other on the issue of marriage. Truth be told, marriage is about bringing people together, not pushing them apart and that's exactly what this organization has been about over the past few years.

Aside from that on an unrelated matter, we've stifled free speech on our social media online properties. We're rectifying that this morning by removing the bans on the hundreds and hundreds of our opponents our staff imposed. We want to encourage an open and fair discussion about marriage and that can only happen if we welcome our outspoken opponents back into the dialogue.

We apologize for our transgressions. We're turning over a new leaf with constitutional and civil rights as our primary focus going forward. We hope you will stand with us as we turn things around for the better.

So after all of that ducking and dodging, NOM has finally admitted to attempting to drive a wedge between the black and gay communities.

And it only took them two weeks after the scandal broke. Figures.

Church leader disgraces his integrity to run interference for NOM

NOM won't stop exploiting African-Americans and lying about it

Why has NOM's chairperson been silent during scandal?

Posted by BlackTsunami at 4:33 AM 3 comments: