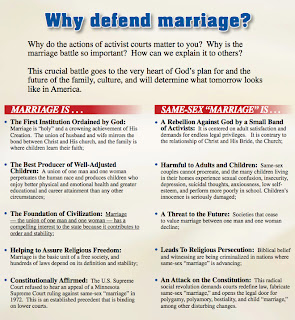 Check out this nonsense from the Alliance Defense Fund against marriage equality.

Notice how it's long on awful portents of doom about marriage equality but short on actual facts that these claims are true.

Pedophilia and bestiality again? The Alliance Defense Fund must be taking their cues from the Minnesota Family Council.

Note to the National Organization for Marriage - refer to this brochure please. I double dare ya.

Gay marriage as bad as 9/11? and other Monday midday news briefs

Sen. Díaz’s Lesbian Granddaughter Rebukes Him, But Religious Arguments Are Succeeding Against Equality - If these arguments are truly succeeding it is because they are merely an excuse for folks not wanting to bring marriage equality to New York.

Ryan-Perkins-Bachmann: FRC is red meat for a GOP sandwich; the meat matters - Why we can't ignore the Family Research Council. Look who they hang out with.

NOM can't stop lying even in its headlines

In a recent entry on its blog, the National Organization for Marriage posted an item about Bronx Assemblyman Michael Benedetto calling for both sides of the argument over marriage equality to tone down the rhetoric:

According to the NY Daily News:


Bronx Assemblyman Michael Benedetto, who supports legal gay marriage, sort of inserted himself as a referee, issuing a statement about the tone of the argument between Diaz and advocates:

"The state legislature has been presented with an important and historic issue and whenever topics of such import fall before the house a civil and rational dialogue is required. Unfortunately, in the discourse between the Senator and bill proponents things are getting out of hand. The Senator is entitled to his views and to vocalize his support of those views. His critics are entitled to challenge them and respond to them. However, there is a responsibility that both sides must adhere to: to carry on their discussions in a manner that is respectful to both sides of the debate. Threats of bodily harm, profanity and overly harsh statements do not contribute to the debate and only serve to cheapen the importance of the issue."

That's all well and good but the headline of the item reads - Another Defender of Sen. Rev. Diaz Steps Forward

And of course that headline is misleading. Benedetto is not defending Diaz. He is merely telling both sides of the argument to act in a more mature fashion.

NOM's misleading headline seems to be a part of a plan to canonize Diaz as an "innocent defender of marriage who is being viciously attacked." Of course that's a big lie. Diaz is giving as good as he is getting.

Diaz, probably the most visual and vocal legislator against marriage equality in New York (not for the power he holds, but for the color of his skin, no doubt, i.e. yet another way NOM plays communities against one another) has been allegedly receiving death threats.

While this is not a good thing, Diaz himself is hardly an an innocent.

A recent march against marriage equality - which Diaz led - featured many anti-gay statements including one pastor saying that gays are worth of death and Diaz's wife calling gays an abomination during her speech.

Diaz himself compared homosexuality to being a drug addict in a recent interview on NY1 Spanish-Language Public Affairs Program.

So to make Diaz out to be an innocent is a colossal lie. And to make it seem that a marriage equality supporter is also supporting Diaz, when he is actually telling everyone - Diaz included -  to cool it with the hot rhetoric is yet another lie.

But we know how NOM hates to be called liars even when caught in the act.

NOM is running a sugary con game on America