Sean Hannity smears Kevin Jennings, but suddenly HE is the victim? 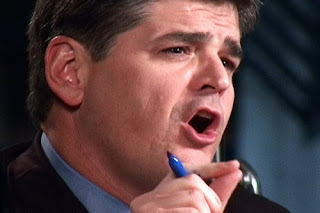 It appears that Sean Hannity has stopped trying to get a "czar scalp" to keep up with the one Glenn Beck supposedly got when Van Jones resigned.

Instead, he is now playing the victim:

Well, according to an Obama supporter named Joan Garry, anyone who criticizes Mr. Jennings is a homophobe. Writing in the Huffington Post she argues, "Anyone who tells you that Kevin Jennings is not qualified for his job... is a big ol' homophobe... 53 GOP members of Congress are trying to get Kevin Jennings fired based on his sexual orientation."

Not surprisingly, Miss Garry sat on the finance committee for Obama for America. She cites no evidence to suggest that criticism of Jennings by me or by anybody else was motivated by his sexual orientation.

You know why? Because there is none.

Hannity is like a man trying to defend himself from a charge of murder by showing the bloody weapon.

My friend, you aren't a victim here.

It HAS been about Jennings' sexual orientation from day one.


We aren't talking about people who embraced Jennings with open arms but suddenly changed their minds after "shocking material" was made known to them.

We are talking about people (i.e. religious right groups and right-wing conservative blogs, organizations, and anti-gay hate groups) who dug through countless records, statements, videos, and audio to find something to stick on Jennings because maybe in a moment of clarity they realized that opposing him because of his orientation would make them seem homophobic.

Please note that I said a "moment of clarity," as in a brief passing fancy.

Their motivations were so obvious that sometimes one couldn't help but to gravitate between pity and disgust for their "full steam ahead" approach.

In Hannity's case, we are talking about a media figure who wanted a head for his trophy case and was so consumed with getting this prize that he sought to ruin a man's reputation based on wild conjecture.

Personally, I think homophobia did and continues to play a huge part in Hannity's attack on Jennings as the following links demonstrate:

Yet another falsehood-based smear of Jennings on Hannity: Jennings "indoctrinat[ing]" kids about homosexuality

But in the long run, it doesn't matter why Hannity attacked Jennings.

His behavior reminds me of what the elders used to say about trying to cover up bad body odor with cologne.

You never get rid of the offending odor, they say, you just add to it.

More on Hannity's attacks on Jennings:


After Stephanopoulos interview about Jennings, Hannity accuses him of "regurgitating the entire talking points of the left"


Hannity "not convinced" of timeline conclusively debunking his smears of Jennings


Hannity repeats call for "Mr. Jennings to be fired" for views "out of the mainstream"


How Fox News tried to help bring down Kevin Jennings


Rep. King's office knew charges against Jennings were false BEFORE sending out letter

Will it be 'death of a thousand cuts' for Kevin Jennings?


Who knew the American Family Association could moonwalk?


The possible attack on the President's lgbt appointees


The tea party idiots - will they go after the lgbt community next?


The religious right thinks that character assasination is a Christian virtue


The war against Kevin Jennings - now it's getting pathetic

How Fox News tried to help bring down Kevin Jennings

I am hoping that those all fired up against Kevin Jennings have finally cooled their jets, so to speak.

But regardless, the entire sordid situation was character assasination of the highest order.

And a lot of it had to do with Fox News.

Now that the Obama Administration is firing back, the media in general is circling the wagons rather than saying the obvious - that there is a problem with the way Fox News is conducting business.

For those media outlets and any other folks who claim that the Obama Administration is "unfairly targeting Fox News," THIS is the video to show them:

See how it works. Hannity or Beck pushes a "line," and then the so-called "legitimate news media" at Fox continues to push the line, using the same inaccurate verbiage or talking points created by Beck or Hannity.

Or - Hannity or Beck starts a controvery based on distortions/information taken out of context.

The so-called "legitimate news media" on Fox allows the controversy to marinate i.e. via more lies courtesy of Beck and Hannity or the right-wing blogs such as Michelle Malkin's.

And then, people like Chris Wallace or Britt Hume or whoever else introduces the controversy with the phrase "there are new questions about . . ." or "there have been some troubling developments about . . ."

Well regardless of their lack of ethics, you have to give them points for skill AND audacity.

Posted by BlackTsunami at 5:51 AM 3 comments: Links to this post

And the children shall lead them . . . into hatred?

I rarely talk about Fred Phelps and his "God Hates Fags" crew because they are nothing more than cariactures.

But the following video defies all description:

No words about what a shame this is; just an observation.

When Fred Phelps passes on, expect his family to become filthy rich by creating a cottage industry of "we were held hostage by a monster."

I envision appearances on Oprah, books written, a regular show on Lifetime network, and maybe even action figures.