An ugly incident involving homophobia at a national gym chain gives a sad, but needed lesson in the false entitlement which comes with today's definition of "religious liberty."

A high-ranking CrossFit employee told BuzzFeed News that he has been placed on an unpaid leave of absence after tweeting his support for a CrossFit gym’s cancellation of a Pride event, citing his belief that celebrating LGBT pride is a “sin.”

Russell Berger, the mega-successful fitness company’s chief knowledge officer and often its de facto spokesperson, said he does not know how long his leave of absence will last. But his work — including his writing for the Russells, a blog about scientific misconduct that he maintains with colleague Russell Greene — has been put on hold at least temporarily, he told BuzzFeed News.

Berger got into hot water Wednesday afternoon when he tweeted about a CrossFit gym in Indianapolis, Indiana, where owners canceled a workout in honor of Pride Month. Many of the coaches and employees quit in protest, raising the possibility that the gym could shut down, according to WTTV TV in Indianapolis.


Before he was put on unpaid leave, Berger taunted folks who voiced their disapproval in now deleted tweets. He played the victim, claiming that the LGBTQ community and its allies were being "intolerant" of his religious views: 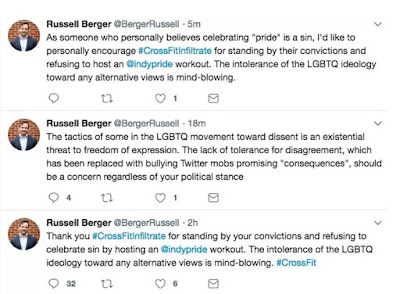 Read more »
Posted by BlackTsunami at 5:09 PM No comments:

'We have entered the stupid phase of the war on LGBTQ rights.' & other Wed midday news briefs 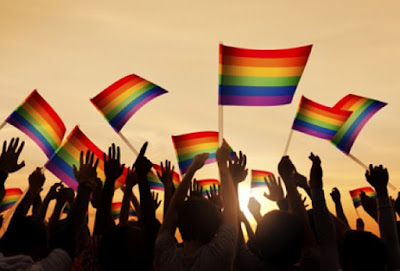 Most Americans Oppose Businesses Refusing To Serve LGBTQ People, Poll Finds - We still have the public mostly on our side. Build on that. Tell our stories. Show our faces.

Masterpiece Cakeshop was just the beginning. ADF is pushing several other license-to-discriminate cases through the courts. - Because the opposition isn't going to let up.

The Christian Right’s bizarre plan to destroy civil rights laws by trolling - And it seems their new tactic will be "trolling" to create incidents of "anti-religious hostility."


Masterpiece: A (dangerous) nothingburger that will change nothing (and maybe everything) - Jeremy Hooper (goodasyou.org) comes out of hiatus to talk about Monday's Masterpiece ruling and drops probably the best analysis of the entire situation. His perspective is one which we sorely need - from a person who has tracked the anti-LGBTQ industry and knows their language (yes, I know I do that but Hooper is much better than me.)

Masterpiece Cakeshop Ruling Is Not As Limited As Some Might Think - And a warning for the future.

As a teen, Zach Wahls once spoke out for marriage equality. He could now become one of Iowa's youngest state lawmakers - A young man who gained fame for speaking boldly for same-sex families, including his own, Mr. Wahls would a fine addition to any Congressional body. He won his primary last night. Good luck in the election.

The US has an HIV epidemic – and its victims are gay black men - And unfortunately, it's being kicked aside.

An Indiana Teacher Says It’s Against His Religion to Call Trans Students By Their Names - The teacher feels emboldened by Monday's ruling, but his explanation is junk. Using the "homosexuality and transgenderism are dangerous lifestyles" will derail his mess should he try to push it further.