How about before the next time the African-Americans and LGBTQs get caught up in another useless skirmish about comparisons, both communities pay attention to the fact that more often than not, they have the same enemies working and speaking against their rights. That way, we can do more vital things like call them out . . . or make fun of them.

And thanks God for slavery:

Instead of arguing about comparing the African-American and queer civil rights movement, I would rather compare Peterson to Uncle Ruckus, a fictional character from the television series 'The Boondocks.'

After all, Uncle Ruckus has wacky views of the LGBTQ community:

And is also thankful for slavery:

Wouldn't that be more conducive to succeeding in our struggles for equality instead of another round of the "Oppression Olympics?"

At the very least, it's funny as hell.
Posted by BlackTsunami at 5:07 PM No comments: 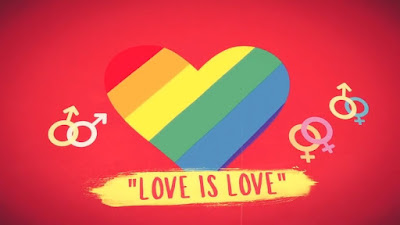 Teacher Says School Reprimanded Him After His Husband Sent Flowers - Apparently to some folks, same-sex couples are supposed to think of our relationships as purely physical endeavors of carnality. God forbid we show the simple truth that our relationships involve more than sexual intercourse. It's good that this teacher was supported by the community.

Parents took over a school board meeting to support a gay teacher & his husband - More about this situation.

Jesse Lee Peterson: Gay Couples ‘Are Not Mentally Capable’ Of Raising Children - I'm going to say this and I don't care who disagrees. Not only do people conveniently forget the times when being black and being queer overlap, they also forget the similar indignities the two identities have to deal with. Whenever I hear about a crime, I sometimes wish under my breath that the perpetrator isn't black because I know that it will be further ammunition for those who generalize about how all of us are criminals. This news brief demonstrates the same for the queer community. A lesbian couple did something truly awful to their kids and here comes this fool to denigrate all gays and lesbians who are raising children.

The Trump administration is paying Focus on the Family to stop the AIDS epidemic in South Africa - And they are pushing "purity pledges" on the young folks there.

"Tiny Beautiful Moments": One Gay Couple's Turn to Fatherhood - Wonderful story!
Posted by BlackTsunami at 9:13 AM No comments: