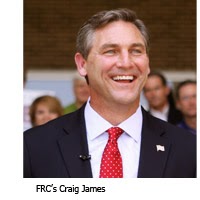 In all honesty, I don't blame the caller for what he said. I blame people like James, Tony Perkins, and the rest of the anti-gay right (especially Fox News' Todd Starnes) for consistently ginning up the lie that gays want to harm Christians. What do you expect when you conjure up visions of gays recreating the Holocaust on evangelical Christians? When you are constantly feeding people fear, what the heck do you expect the outcome will be?

Posted by BlackTsunami at 6:37 PM No comments:


Last week, the anti-gay group PFOX (Parents and Friends of Ex-Gays) suffered a huge embarrassment because of a billboard it put up on a Virginia interstate:

The billboard appeared recently beside I-95 in Richmond, Virginia, according to NBC affiliate WWBT. The sign depicts two males, one dressed in a suit and the other in a white T-shirt, and says: "Identical twins: One gay. One not. We believe twin research studies show nobody is born gay."


As it turned out, the two males featured in the billboard sign was only one man, Kyle Roux, who happens to be openly gay.  This slip provided a delicious degree of schadenfreude
for the lgbt community.

However, in the midst of the laughter and derision, the lgbt community seem to be missing the larger picture which can be potentially beneficial to the community.

The way PFOX cited twin studies is inaccurate, according to lgbt activist and Truth Wins Out Executive Director Wayne Besen:

“PFOX’s billboard underscores the groups scientific illiteracy and shows that ‘ex-gay’ activism is about demagoguery and marketing, rather that truth and results,” said Besen. “In reality, twin studies prove that there is a genetic link to sexual orientation. It is stunning that PFOX would pay for a billboard to showcase its ignorance and incompetence.”


A Truth Wins Out press release accused PFOX and other anti-gay groups of continuously distorting science:

. . . anti-gay activists consistently distort research. They point to twin studies and say, “if homosexuality was truly genetic, the concordance rate for identical twins would be 100-percent.” Scientists say that this is a gross misunderstanding of the research. According to Dr. Eric Vilain, Professor of Human Genetics, Pediatrics and Urology at UCLA, and the Director of the Institute for Society and Genetics:


“All sorts of traits that are clearly genetic do not show 100% concordance [in twins]. I’ll give you examples, if people look at obesity. Or autism, looking at twins. There is undeniably, no one will even challenge that there is a genetic cause for both obesity and autism.

The twin studies do not show that it is 100% genetic. They just demonstrate that there is a genetic influence. There could be other influences on sexual orientation. Some of them might be environmental. For instance, the older brother effect [studies showing the more older brothers a boy has, the more likely he is to be gay] is an environmental influence. That’s what has happened in the past, in the same womb seems to influence the sexual orientation of future pregnancies. So, it is certainly not an all or nothing phenomenon.”


Truth Wins Out's  press release also quoted  Dr. Marc Breedlove, Michigan State University, Rosenberg Professor of Neuroscience and Dr. Simon LeVay, author of Gay, Straight, and the Reason Why: The Science of Sexual Orientation. They both went into detail about what was omitted by the simplicity of PFOX's billboard.

PFOX's  billboard is the latest in a long history of scientific inaccuracies and distortions undertaken by various anti-gay groups to bolster their negative claims against the lgbt community.

Read more »
Posted by BlackTsunami at 3:41 PM No comments:

No One Is Born Gay? Hundreds Join In Protest Of 'Ex-Gay' Billboard - Nothing like an idiotic anti-gay happening to get the folks stoked up. I hope they stay stoked up.

Mississippi Pastor Edward James Protests Gay Marriage With Horse In Wedding Dress - Somehow I don't think he successfully made his point. What I want to know is how did he get the dress on the horse.

No, My 10-Year-Old Son Isn't Looking for a Girlfriend. He Likes Boys. - I read this piece over the weekend and I think it should have a wider audience. THIS is what parental support looks like.

Scott Lively claims homosexuality worse than mass murder 'from God's perspective' - Because apparently God speaks His word through a two-bit homophobic #@!% who exploited homophobia and fear in foreign countries to further the persecution of lgbts. Who knew?

Bobby Jindal Is Predictably Partnering With Anti-Gay Radicals For His Prayer Rally - Bobby, Bobby, Bobby! The key to pandering is to not make it look so obvious.