Why I LOVE those anti-gay activists from France

Is it wrong for me to start enjoying it every time La Manif Pour Tous, the anti-gay group in France, stages yet another protest against marriage equality: 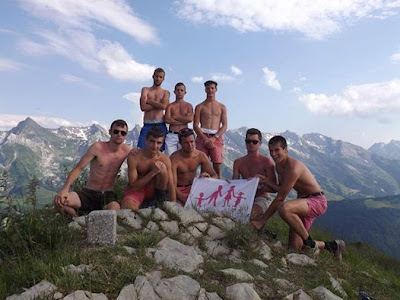 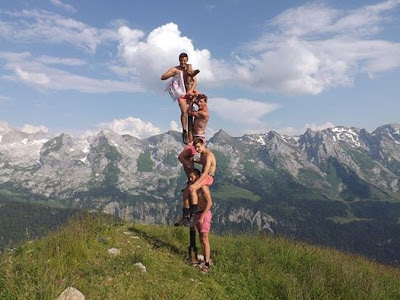 The anti-gay equality activists, calling themselves La Manif Pour Tous, are well-known for their blatantly homoerotic protests, the irony of which is surely lost in a haze of fervent bigotry. But hey, if these Frenchmen want to strip down, run around with each other in boats and climb poles on top of mountains, who are we to stop them?

The group of men began these protests following France's legalization of gay marriage last April, leading to a violent backlash among citizens who were unhappy with the legislation. Apparently, some people just choose to express their hatred of gay marriage in a less violent, more naked form of protest. And sometimes, they like to be gagged.


Oh why can't all anti-gay protestors be like this?

Posted by BlackTsunami at 3:00 PM 5 comments:

Conservatives Hope Marriage Discrimination Persists In Rhode Island And Minnesota - You really don't expect them to let us enjoy our day, do you? They simply have to get over it. They kept saying "let the people vote." The people voted. Marriage equality won. End of story.

Tony Perkins: 'It'd be a lot simpler if we operated on the Ten Commandments' rather than civil law - So Tony Perkins of the Family Research Council is expressing a desire for a theocracy. Why am I not surprised. Well at least I'm with him on the 10th commandment. I would NEVER "covet" Tony Perkins' "ass."

Bipartisan Campaign Launched to Pass Employment Non-Discrimination Act - I totally support this but I've said it once and I will say it again. Without a plan to combat the lies about ENDA head on, it's going to be an UGLY campaign.

Bryan Fischer: Post-DADT Military "Emasculated, Neutered, Feminized, And Weakened Beyond Repair" - Bryan Fischer ought to know because he is presently serving in the military, right?
Posted by BlackTsunami at 9:01 AM 1 comment:

Gay couples make it legal in Minnesota with marriage

EARLY this morning when the marriage equality law in Minnesota went into effect, Margaret Miles and Cathy ten Broeke became the first gay couple to be married in the state with their son taking part in the ceremony in front of a multitude of supporters: 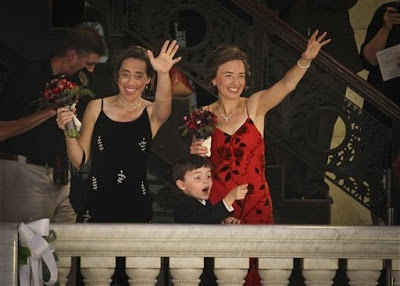 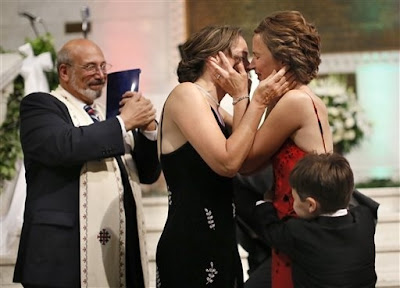 Now I ask you, what's wrong with this? Not a damn thing. See Buzzfeed for more pictures and the complete story.
Posted by BlackTsunami at 4:26 AM No comments: