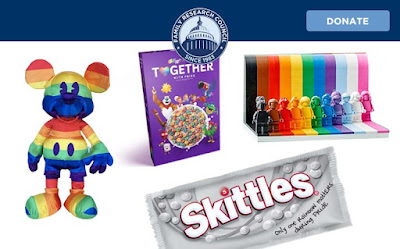 Hate group the Family Research Council goes where the outrage is. Its fundraising email calls 'wokeism' a danger to American children, but the propaganda screams homophobia. Apparently, directly targeting LGBTQ people as a danger to children isn't as lucrative as wrapping up the same old hysteria into a deceptively brand new package and calling it 'wokeism.' 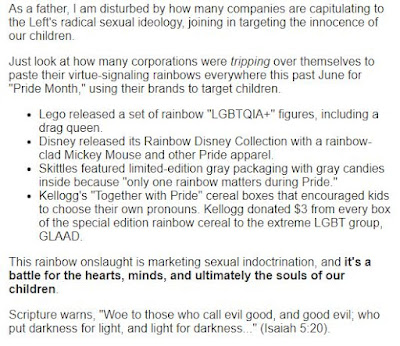 The irony is that the stuff which FRC president Tony Perkins lists as dangerous isn't dangerous. In fact, these incidents and products which Perkins claims are detrimental to children bring about the opposite effect because they underscore a simple truth - that LGBTQ children and same-sex families exist.

There is nothing sexual about it and if Mr. Perkins feels that his family suffers because of this, then that's solely his problem. If he feels that he and his organization has a right to erase these children and families, well he needs to get off of his high horse.

I can't say the same for the propaganda of Perkins and FRC.

Posted by BlackTsunami at 3:52 PM No comments:

Will the Supreme Court overturn marriage equality? Barney Frank doesn’t think so.​ - Fingers crossed, Mr. Frank.
Trans Workers File Unfair Labor Practices Complaints Against Netflix - And I hope they win.
8 LGBTQ candidates who could make history in November - Let's hope so.
Kal Penn comes out & announces his engagement ahead of tell-all memoir - We heard but it bears repeating.
Kumail Nanjiani Responds to Critics of LGBTQ Eternals Character: 'We're Upsetting the Right People' - Not necessarily a fan of the movie but hoping that it's a big hit cause the last thing I wanna hear is how 'wokeism' contributed if it flops. What bullshit.
Posted by BlackTsunami at 8:45 AM No comments: