Chuck Norris - the fraud who won't stand up to real injustice 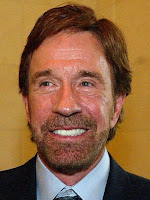 Chuck Norris is an action movie star - and a bad one. But he should stay that way. His forays into politics reveal his basic ignorance.

He has penned a piece for the American Family Association whining about how the Obama Administration has declared war on religion. Personally I don't think he wrote it. I think someone else wrote it and he attached his name to it because it reads like the usual religious right hogwash.

But two items on his supposed list of grievances caught my eye:


Here is why the two items caught my eye. The first item is a basic lie. And that can be easily be proven by the link contained in the item. The Washington Post article which it links to clearly says:

The Pentagon will permit military chaplains to perform same-sex marriage as long as such ceremonies are not prohibited in the states where they reside, it said Friday.

Defense Department guidance issued to military chaplains said they may participate in ceremonies on or off military bases in states that recognize gay unions. Chaplains are not required to officiate at same-sex weddings if doing so is counter to their religious or personal beliefs, the guidance said.

The second claim I illuminated is important because it illustrates the fraud that Chuck Norris is exposing himself to be:


Secretary Clinton was not demonizing religious beliefs. She was calling attention to the fact that in some foreign countries, lgbtqs persecuted by ways of beatings, vicious murders, forced rapes, and forced reparative therapy:

Today, I want to talk about the work we have left to do to protect one group of people whose human rights are still denied in too many parts of the world today. In many ways, they are an invisible minority. They are arrested, beaten, terrorized, even executed. Many are treated with contempt and violence by their fellow citizens while authorities empowered to protect them look the other way or, too often, even join in the abuse. They are denied opportunities to work and learn, driven from their homes and countries, and forced to suppress or deny who they are to protect themselves from harm.

Chuck Norris considers himself an action hero. He has starred in many motion pictures and a television show (Walker, Texas Ranger) portraying himself as someone who fights against injustice. As such, Norris has been shown fictionally preventing innocent people from beaten, killed, or generally terrorized.

How is it that this man who has made a career out of being a hero to the persecuted in motion pictures and television can conveniently ignore actual cases of people being persecuted simply because these people are gay?

The answer is clear. Chuck Norris is a liar and a fraud. His persona is nothing much than  phony macho bravado.

Chuck Norris can't stand up to injustice because he simply doesn't know what real injustice is.  The only type of injustice he knows belongs on a soundstage. It begins when the director says "action" and ends when the same director yells "cut."

Somehow, because of all of the years in this phony world, Norris sees himself as an actual heroic figure.

A little advice, Chuck. Stay in the land of make-believe. In real-life, you just don't measure up to your image.

Posted by BlackTsunami at 3:10 PM

the man is just a bald-faced liar. in fact, i wish he were bald-faced. that beard makes him look dirty. not in the good way.

Chuch Norris? I thought he was dead.

Heh. Divorced and remarried, with at least one child from an extramarital affair. Why am I not surprised?

Chuck is just a life (size) card board stand up figure.
You'll notice he doesn't even fight injustice in TV shows, It's always some farcical [Mexican] drug lord in a propaganda piece [for] the drug war, the worst injustice our society has ever witnessed.

What a disgusting neverwas.

Fake hair, bad actor and bigot. Nice way to be remembered don't you think. A sad few care what he thinks. Besides he's old and cranky.

Get a life Chuck Noris is a Man of God you wimps that cant handle, oh well. Jesus is coming soon hope you wake up.

A man of God who defends corrective rape and imprisoning people simply for being gay? Talk about your contradictions. I cringe to know what God he serves.

Chuck Bore-Us is still feeling the after-effects of the beatings (real and psychological) he took from Bruce Lee. Going through life living in the shadow of a REAL Action Hero must be its own hell. Pity the fool.

he's a very short man with a Napoleon complex, so he's just doing what comes naturally. ignore this loser and soon he'll fall back into whatever hole he crawled out of.

If you had read World Net Daily for years, as I have (for some utterly unknown reason) you would know that the examples you cite are exactly in line with the sort of sordid garbage that Chuck (or someone using his name) has been pumping out for years. Unfortunately, other than his fourth rate celebrity, nothing really separates him from the millions of right wing "Christians" who hold the same beliefs.

Yes, an action hero, who wants to be taken seriously. Sounds like meat for an SNL skit.

He's a dancer, fergoodnesssakes, couldn't fight his way out of a wet paper bag.

He was kicked in the head too many times by Bruce Lee!

Well done, sir. Why is it that every single one of these reich wing douche bags hold a Ph.D. in "Bearing FLASE WITNESS?" They take extreme pleasure in lying in the name of doing great harm to anyone who does not subscribe to their hateful point of view. Liars never prosper, and in the end, their sociopathy always gets the best of them. Look at that phony,lying Ted Haggard......fer' christsake.

Hey, Ten Bears, he's an idiot and a bigot, as well as a horribly bad actor, but don't dis the one thing he was good at. He is expert in Tang Soo Do, and he was a bad man when he was younger. You must be thinking of some other action star who is a dancer. Chuck is a fighting fool...literally.

Chuckie, Your full of the brown stuff!!

Norris was a tournament point fighter. He never fought in a full contact match, although some of the point fighting allowed contact and sometimes people were knocked out.

Chuck Norris ruined any hope of Expendables II becoming a good movie... He was upset at all the cursing and violence in the movie, as it was against his faith, and had them removed or he would leave the project. Cry me a river chuck! Van Damme is the man, chuck is the dancer.

I agree Alvin, Norris just put his name to this Christian Right propaganda.
As is usual for the religious right they're confusing "war on religion" with justified criticism of their bigotry and ignorance.