2012 election was a gamechanger in gay history

Last night's election was such a gamechanger when it comes to lgbt equality in so many different ways. First of all, let's repeat the main victory: 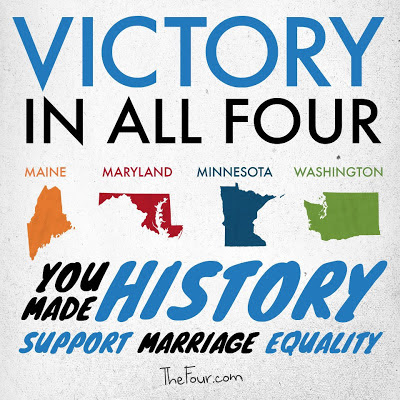 Marriage equality is now law in Maine, Maryland, and Washington State. Meanwhile, Minnesota turned aside a ballot initiative which would have put a banning of marriage equality in the state constitution.

Naturally the National Organization for Marriage, which wasted over $5 million in these efforts are very disappointed. The organization issued an official statement of disappointment, but for my money, I rather enjoy the statement that its founder Maggie Gallagher made:

The Obama electorate defeated marriage. I’m guessing we lose at least three of tonight’s four races, and maybe four of the four. We were outspent eight-to-one — and no one was willing to speak for marriage, while the whole Democratic establishment and Hollywood campaigned for marriage. Last night really is a big loss, no way to spin it.

Oh Mags. I have one way to spin it. The people have spoken and you lost. Hard. And after so many losses which you threw up in our faces, these victories feel might good.

Now while our victories in marriage equality were awesome reason for celebration, they should be not the only reasons why the lgbt community should be in a party mood.


Tammy Baldwin's groundbreaking Election Night victory has already been praised by lesbian, gay, bisexual and transgender (LGBT) rights advocates, who said the Wisconsin Democrat's success in becoming the first openly gay person ever elected to the Senate in America's history was evidence that "candidates should be judged on their qualifications for the job and not their sexual orientation." In addition to Baldwin, 2012 proved triumphant for a number of other LGBT politicians. New York Democrat Sean Patrick Maloney won a seat in the U.S. House of Representatives and became his state's first openly gay member of Congress. Baldwin's vacated seat in the U.S. House of Representatives in Wisconsin's 2nd Congressional District was succeeded by Democrat Mark Pocan, making it the first time and openly LGBT member of Congress was succeeded by another in the same district.While it's too soon to tell for sure, California's Mark Takano looks poised to win a seat in the U.S. House of Representatives in his state's 41st  Congr essional District and become the first openly gay member of Congress who’s also a person of color, the Washington Blade reports.


Not only did the lgbt community finally shut NOM's mouth (at least for now) by handing the organization a HUGE defeat, we did rather well when it comes to representation in the Senate and House of Representatives.

And NOM is not the only organization upset over last night's "shellacking." The Family Research Council held the following video bitchfest:

Bring it on guys.

Posted by BlackTsunami at 3:06 PM 6 comments: 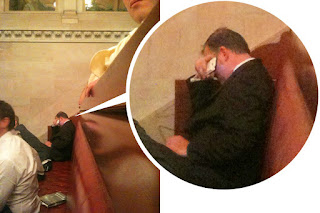 Brian Brown, president of NOM, has a lot to cry about after last night.

To add to the happiness over Obama's re-election and Tammy Baldwin's election to the Senate comes another bit of good news sure to make the lgbt community shout from the rooftops.

All victories are sweet but three of those victories should be considered extra sweet by the lgbt community. In 2009, voters initially passed a referendum in Maine defeating the state's pro-marriage equality law. Last night, Maine became the first state to approve marriage equality through a popular vote.

Maryland was also a hard fought battle. In 2010, a marriage equality law just missed being passed by the state legislature after a coalition of religious leader and African-Americans legislators voiced a huge disapproval of it. When it was passed last year, it was almost immediately put up to vote via referendum.

Washington State was one that gay equality advocates really expected to win and as the votes slowly came in, marriage equality always led the count.

Minnesota was one many gay equality advocates expected to lose. Leaders of the Catholic Church fought tooth and nail to pass an anti-marriage equality law, including Archbishop John Nienstedt, who led the charge for the initiative by blurring the lines between politics and the church even in the face of much criticism.

At press time, the National Organization for Marriage has yet to comment on these losses, which is not surprising. The organization was involved in each initiative and has to be shocked at losing them all.

To make matters worse for the organization, NOM also lost a sparsely watched but crucial battle in Iowa to defeat a judge who voted for marriage equality in that state. Judge David S. Wiggins handily won another term  in spite of a huge campaign by NOM and other religious right figures to have him dismissed. His victory comes two years after NOM led a successful effort to defeat three other Iowa judges who ruled for marriage equality.

To many in the lgbt community, last night brought a sense of completeness that they should have had in 2008. That election night, President Obama became the first black president, but we lost the Proposition 8 vote in CA. Last night, brought a huge change from four years ago.

And it felt so right.

Posted by BlackTsunami at 4:45 AM 8 comments: