NOM won't stop exploiting African-Americans and lying about it

When an organization has been discovered to be deliberately exploiting hostilities between the gay and black communities on the subject of marriage equality, will that group:

a. deny that the allegation is true

b. say that the allegation is true while apologizing

c. claim that the discovery of the allegation is a plot while continuing to attempt to play the gay and black community like pawns, this time in a fundraising appeal.

The organization in question is the National Organization for Marriage, so you can guess the answer, And if you can't, the following photo posted on NOM's blog today should give you a clue: 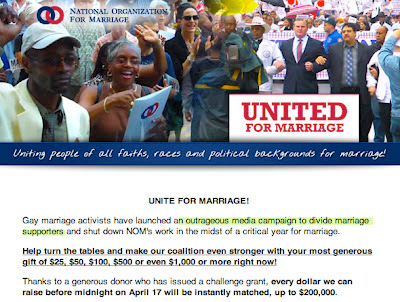 It's a big turn from what former NOM head Maggie Gallagher said last night during a debate at Washington and Lee University in Virginia against gay author Andrew Sullivan:

Gallagher insisted that while the language in the memos was inappropriate, NOM’s racial strategies were acceptable.

“What NOM has actually done is go across the country and reach across lines of race, party, and color and religion to work with people who believe marriage is the union of a husband and wife for a reason,” Gallagher said.  “I don’t think that’s a racist or unethical strategy at all.”

Gallagher also said she didn’t like the language in the memos because it suggested that minority leaders only opposed gay marriage because of NOMs efforts.

“I think it’s disrespectful to the African and Hispanic leaders who have stood up because they oppose gay marriage in fights across the country,” Gallagher said. “For us to suggest that they are doing so as a result of being manipulated by white, suburban, Republican girls like me [is wrong].”

“The strategic goal of this project is to drive a wedge between gays and blacks — two key Democratic constituencies,” reads one document. “Find, equip, energize and connect African American spokespeople for marriage; develop a media campaign around their objections to gay marriage as a civil right; provoke the gay marriage base into responding by denouncing these spokesmen and women as bigots. No politician wants to take up and push an issue that splits the base of the party. Fanning the hostility raised in the wake of Prop 8 is key to raising the costs of pushing gay marriage to its advocates and persuading the movement’s allies that advocates are unacceptably overreaching on this issue. Consider pushing a marriage amendment in Washington D.C.; Find attractive young black Democrats to challenge white gay marriage advocates electorally.”

Gallagher continues to play this paragraph off like a minor blip, an unfortunate choice of words. But it's much more. There are too many words in this paragraph for it to be looked upon as a minor blip. Those words outline a deliberate strategy.

And every time Gallagher opens her mouth in a sad attempts to soothe shock over this, she only makes it worse.  She claims that NOM's goal  was to "go across the country and reach across lines of race, party, and color and religion to work with people who believe marriage is the union of a husband and wife for a reason."

If that was truly the goal, then words or phrases which denotes "togetherness" and "unity" would have been in the document.

Instead, the document talked about "wedges" and "fanning hostility."

It is insulting to think that African-American leaders or any leaders of any ethnicity can be manipulated. And Gallagher and NOM should be ashamed of themselves for attempting the manipulation.

NOM's latest attempt to save face? Accusing HRC of 'stealing' or 'working with a criminal' - Can you see the beads of sweat on Maggie Gallagher and Brian Brown's face as they worked on this desperate press release. No doubt the religious right (and the right in general) will give this mess play, which will work in our favor.

EA defends itself against thousands of anti-gay letters - It's just a video game, folks. Man, it must be nice to have thousands of sheep to control.

Chile Passes Anti-Discrimination Law Following Daniel Zamudio's Death - It's kind sad when change has to come from such an awful incident rather than on its own.

The following is a true story to remind folks how far our community has come. There was a time that a gay youth wouldn't be brave enough to make such a public statement, to say nothing about being defended by so many people after said incident:

An assistant principal at Fullerton Union High School took to the school's public address system Wednesday and apologized for pulling a student off the stage of the school's so-called Mr. Fullerton competition after the young man made remarks in support of gay marriage.

The student, who was participating in the annual light-natured pageant, was asked by judges what he hoped his future had in store.

He reportedly replied that he hoped to find a partner and marry him if gay marriage were legal, according to a report in the Orange County Register. The student has not been identified.

Fullerton Joint Union High School District officials on Wednesday criticized the assistant principal, whose name hasn't been released, saying that the "matter was not handled appropriately." Supt. George J. Giokaris said in a statement that the "matter should have been handled privately."

The assistant principal met with the student, asking him if a public apology would make the situation worse for the student or embarrass him, the district said. The student told him it would be all right.

So on Wednesday, the district said the assistant principal apologized to the student by name and to the rest of the school community, acknowledging that he had handled the situation inappropriately.

The district, citing the confidentiality of personnel issues, declined to say whether any  disciplinary action against the administrator was taken.

What's inspiring about this story is how the young man's fellow students took the initiative to protest what they felt was an unfair action. Most likely, what they did led to the apology:

Friends of the student protested by passing out nearly 200 letters addressed to the assistant principal asking, "Where do you see yourself in 10 years?"

The letters included space for protestors to write a personal message. Senior Blake Danford, who helped organize the protest, said the group plans to deliver them to the assistant principal later in the week.

"This is an entire situation about bullying," Danford said.

Stories like this no doubt scares the religious right because it means quite simply in spite of all of their money, their connections, and their lies, they won't win in the end.

Change is coming and at the head of that change is the next generation, opening doors and stamping down ignorance.

I say bring it on.

Posted by BlackTsunami at 4:40 AM 3 comments: