From the blog Joe.My.God: 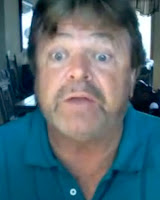 The Smoking Gun has identified the douchebag who set fire to a box of Cheerios outside the Minnesota headquarters of General Mills. Flaming cereal bits then ignited the company's lawn and the man and his giggling accomplices fled.

The gay marriage opponent seen in a viral video accidentally setting a fire outside the General Mills headquarters is a Minnesota real estate broker who has previously recorded a series of anti-gay YouTube clips. Michael Leisner, 65, can be seen outside the General Mills corporate campus in Golden Valley. He is carrying a box of Honey Nut Cheerios in one hand and a blowtorch in the other. On Michael Leisner’s YouTube page (Live4Chr1st) he can be seen attacking Representative Barney Frank and Bill Maher, while noting that President Barack Obama has “bent forward to accommodate the sodomites of New York.” He also makes reference to "gay perverts," "fierce faggots," and the "depraved, debasing debauchery of gay activists."

And if you think the video of this "pastor" playing with fire is bad, then I don't know what you are going to think about the following video he made in "tribute" to Congressman Barney Frank marrying his long-time partner:

Posted by BlackTsunami at 7:52 PM 9 comments:

You ever notice that for all of their complaining about how gays are attempting to "redefine" marriage, if you pointed out to religious right groups that marriage has not been the same throughout history, they bristle.

A perfect example is the graphic that has gotten NOM's Ruth Institute up in arms: 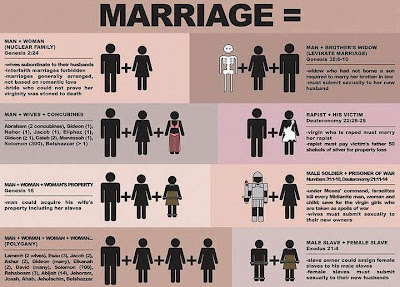 This is what the Ruth Institute says about the graphic on its Facebook site:

This image has been making the rounds on Facebook, in an attempt to discredit those of us who insist that removing the gender requirement is redefining marriage. Look carefully at the image and you will see that in ALL of the examples, both genders are represented. This image reinforces the conservative position about needing a gender requirement, it does not undermine our position. And here is why: marriage has always been understood primarily as the means to bearing and raising children. Yes marriage provides companionship to the married partners, but that has never been the reason we needed marriage as a society.

Do you buy that? Neither do those leaving comments. The Ruth Institute's Facebook site is getting blasted.

Extra Treat: Think Progress is also getting into the act - NOM Defends Biblical Marriage, Including Slavery, Concubines, Polygamy, And Rape

Posted by BlackTsunami at 3:12 PM 3 comments:

At least when we act "the fool," we do it with more style.

In the News: In the District, a same-sex couple’s adoption success story - It's always sadly interesting that when the religious right talks about families, they omit OUR families.

Chick-fil-A: Were the Protests a Big Fail? And Where Do We Go From Here? - A dumb question but with a smart answer. And it speaks to the fact that our community must stop expecting overnight victories. An hour in a protest line or kissing in front of a restaurant will not undo decades of lies. It will take discipline, calm, and trust in each other. Also, each gay activist should read The Art of War.

Even Mitt Romney Thinks Boy Scouts Shouldn’t Be So Anti-LGBT - Romney will probably change his mind before this post goes up. The bitch is fickle.

Posted by BlackTsunami at 9:02 AM 7 comments:

NOM's 'sneaky support' of ex-gay therapy is fooling no one

Remember this video (the most pertinent part is 9:09):

Maggie Gallagher: I've never advocated for gay reparative therapy and the National Organization for Marriage does not."

Of course Maggie was lying back then and the idea that NOM does not advocate for reparative (ex-gay therapy) is a lie which can be proven by simply looking on its blog:

The post is a link to Lifesite news, a right-wing site, complaining about a bill in California which would anyone under 18 from receiving reparative or sexual orientation conversion therapy, even if requested by the teens or their parents.

Seeing that reparative therapy is a fraud,  this law would be an excellent idea. But the point is that NOM is being duplicitous yet again.

Of course Maggie Gallagher will probably do her standard "a link is not an endorsement" lie but of course that's another misdirection.

NOM knows exactly what it's doing by posting that mess and based upon the responses, it got what it wanted without getting its hands dirty:

The 80 to 97 percent of our children who are “not born that way” can easily be educated to find sexual pleasure that way (unless the parent is allowed to say “no” in one form or another). Our commercial world (and national education system) is being given full authority to teach and encourage our children to try these new forms of “healthy entertainment”. (“I kissed a girl and I liked it, hope my boyfriend don't mind it” being sung by a high-school girl [so it sounds], playing over the load speakers of your local family restaurant, being just the beginning of a commercial corporate free for all frenzy toward manipulating our kids toward new and never before explored financial gains.) And during this time the parents will not have the right to educate their children (the 80 to 97 percent who are “not born that way”) to focus their sexual energies toward the opposite sex. The whole nation can teach, force, pressure, encourage our children to learn algebra, spelling, chemistry, carpentry, all unnatural things that need concerted community effort, guidance and encouragement; but we will not be allowed to encourage in the slightest our children to stick to opposite sex sexual relationships, without coming across as being poor and abusive parents; who probably need their children taken away from them. What in the world are our armies doing over seas? We need them more then ever right here fighting to save us, from our own corrupted government and its money loving West and its banks! And not somewhere on the other side of the glob fighting for Wall Street and company's own personal gains.
Help to protect the 80 to 97 percent of our children who “where not born that way” from being sexually abused, and confused, by the United States Government, Wall Street, the City of London, the powers that be.

Rick you have nailed it on the head. Thank you to all of you on these NOM pages for intelligently commenting and standing up for true marriage. I remember a commercial in 2008 during Prop 8 saying that the Gays want nothing to do with teaching the children in schools about thier lifestyle. We now have 8 new mandates in the public schools teaching our children about homosexuality. We knew it was inevitable because it was and is happening in Mass. And we keep being told by the radicals that there is "no Gay agenda". Liars.

Homosexuality doesn't make sense, MGC. Certainly there are very few absurdities ever concocted in all of human history, that make less sense than gay "marriage".