So Franklin Graham just put out this tweet this morning: 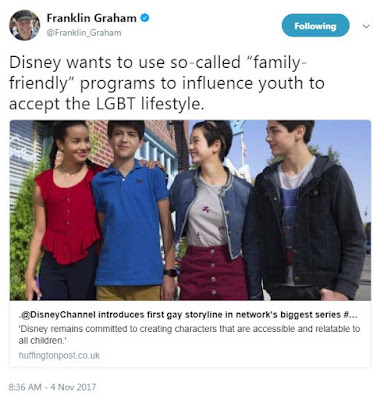 So he's mad at Disney for daring to emphasize the reality that LGBTQ children exist. That's his right. However, I call out his homophobia as well as his hypocrisy for doing so.

This is the same guy who supports "pu@@y-grabber" Donald Trump's presidential administration even to the point of speaking at his rallies. However to my knowledge, he has NEVER publicly called Trump to the carpet for the myriad of distasteful things he has done, from his vulgar comments to his questionable public policies, and general incompetence.

What's more of a negative influence on our children? Disney acknowledging the simple fact that LGBTQ youth exist and showing their lives or a pastor who has abandoned his moral and religious integrity for the power and spotlight?

Posted by BlackTsunami at 9:49 AM No comments: