Remember what I said in my last post about NOM's audacity? Forget that. The following not only crosses the threshold for audacity but wins the award in perpetuity. Check out the following photo: 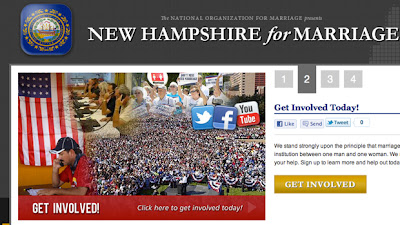 Jeremy Hooper from Goodasyou.org (who deals with NOM's lies at a level that even closer than me - I admire his strength and strong stomach) instantly suspected it to be a fake.

And he was right: 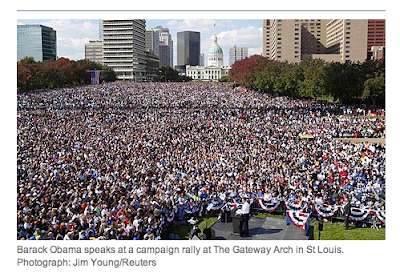 Yes, that's right: They lifted a Reuters photo. From another state. From more than three years ago. Featuring a man who stands against NOM's agenda in most every way possible.

In the long run, it doesn't matter how many victories NOM receives - even though the organization is going to eventually lose this fight against lgbtq equality - the organization has shown itself to be totally devoid of integrity and morality.

Seems to me that anyone looking to this organization to protect marriage or anything they perceive to be "good" and "noble" is barking up the wrong tree.

Posted by BlackTsunami at 4:51 PM 9 comments:

Today, the National Organization for Marriage really decided to raise the bar for unashamed audacity. The organization is now demanding that Obama's Justice Department pay for Speaker of the House John Boehner's defense of DOMA ( the Defense of Marriage Act):

In response to Democratic Rep. Mike Honda of California's calls for hearings on the cost of the House's defense of DOMA, the National Organization for Marriage (NOM) released this statement:

"John Boehner and the House are stepping in to do the job that President Obama refused to do: defend a law passed by bipartisan majorities. The cost of hiring lawyers to defend DOMA should be deducted from the budget of the Justice Department," said Brian Brown, President of NOM. "The $1.5 million cost of defending DOMA represent less than one-one hundredth of one percent of the Justice Department's huge $28 billion budget. President Obama's defection of duty is responsible for incurring this cost; he should trim some fat and find the money to pay for it."

The Obama Administration decided not to defend DOMA because it felt that the law could not be defended. Speaker of the House John Boehner decided to take up the slack . . . and stepped into a hornet's nest. He is now set to spend over $1 million on the defense of DOMA. The amount of the defense was earlier set at $500,000 but apparently the lawyer handling the case,  Paul Clement, quickly went through this amount.

Perhaps it had something to do with the fact that the defense of DOMA was rooted in chicanery and junk science:

3. Clement is also citing - in a second hand fashion - junk science from discredited researchers. In his defense of DOMA, Clement cites the work of Case Western Reserve University law professor George W. Dent, Jr. But Dent's work - which Clement uses -  cited both Paul Cameron and George Rekers, two discredited researchers. Cameron has been censured or rebuked by several organizations for his bad methodology in his studies. He has published work which claimed, among other nauseating false things, that gays stuff gerbils up their rectums. (Editor's note-  the piece Cameron cited to make this claim - The Straight Dope - actually said that this claim was not true. Cameron dishonestly "flipped the script" to make it seem that The Straight Dope was affirming this claim.) Rekers lost a lot of credibility for last year's scandal when he was caught coming from a European vacation with a "rentboy."

It is for these reasons that Rep. Mike Honda (D-CA) demanded a hearing on how money is being spent on the defense of DOMA.

Even if no one ignored that Boehner's defense of DOMA is rooted in bad techniques and junk science - which I noticed NOM did ignore -  the audacity of the organization here is astounding.
NOM just lost a court case in which it sought to sought to hide donors in CA who contributed to the successful effort to pass Proposition 8.

Perhaps NOM shouldn't worry who is paying for the defense of DOMA and focus on releasing its donors as it has been ordered to by law and the courts.

Posted by BlackTsunami at 3:28 PM 2 comments:

Battling for gay rights, in Allah's name - Sometimes you have to give homage to folks who are really sticking their necks our for lgbtq equality.

New Hampshire Committee To Vote On Repealing Marriage Equality - Of course the move is unpopular with the state's residents. But we know how NOM and company operates. Any opinion is irrelevant unless it matches their point of view or at least has been washed in the slurry of its "gays want to use marriage equality to steal the innocence of children" lies.

Wait, FRC doesn't realize its 'research' is detrimental? Weird, everyone else does- ANYONE who tries to publicly pass the Family Research Council's propaganda off as legitimate research will have hell to pay. And I just happen to have a huge pitchfork in both hands.

Do they want gay youth to commit suicide?

My favorite phony news service, One News Now, is giving a Florida religious right group, the Florida Family Association, room to gripe about what it calls a "gay promotion targeted at children:"

MTV's channel "Teen Nick" has begun airing a promotional announcement for The Trevor Helpline, "a free and confidential service that's open for gay and questioning youth. Be proud of who you are." The organization's website has a constant link called "Things to consider when coming out" and is currently promoting "Gay History Month."

Upon discovering that Target Corporation is the main advertiser during Degrassi, the Florida Family Association -- which describes that program as "shameful" -- prepared an e-mail for the public to send to the CEO and other officials of the retail chain.

They are openly recruiting teens and children to become 'gay' on a program that also promotes the transgender and homosexual lifestyle," laments David Caton, executive director of the pro-family group.

And he wonders how the helpline helps a child or teenager who may be a bit confused about his or her sexuality, since in openly promotes that "if you call this helpline, you are not persuaded to walk away from the lifestyle. You are persuaded to be proud and embrace it." Caton contends that is "irresponsible" on the part of a network that caters to young people, and on the part of Target.

What's irresponsible is letting Caton run his mouth. The hotline he is griping about is a part of the Trevor Project, which is an organization devoted to preventing suicide amongst lgbtq youth.

But apparently suicide amongst lgbtq youth doesn't seem to be a problem to Caton. He seems to think that telling a lgbtq youth to simply change "his or her orientation" will keep them from being bullied at school or isolated at home.

And there, ladies and gentlemen, is the real sad story of how Christianity has been corrupted in this country. By himself, Caton is an unfeeling, uncaring buffoon. But he is not by himself.

Caton is a part of a much-moneyed interwoven system of wannabe Christians who seem to ignore the sick and the hungry in lieu devoted solely on the nonexistent gay menace.

Even as they fund efforts to keep teachers employed who attack their gay students (i.e. Vicki Knox), they attack the programs which gives these students some sort of support in the face of these ugly comments and other indignities heaped on them.

It seems to be a zero sum game to these supposed Christians in which they are willing to sacrifice anything, including the safety and well-being of lgbtq children.

Posted by BlackTsunami at 5:04 AM 4 comments: