In a post earlier today, I wrote about a controversy involving Peter Vlaming,  a Virginia teacher who was fired for disrespecting a transgender student. I used the controversy to demonstrate how the anti-LGBTQ industry creates and then exploits fears to undermine the LGBTQ community in general.

Unfortunately, I forgot one  ingredient - ignorant adults who attack the transgender community even to the point of making fools of themselves. I apologize to those who may be offended by this exchange, which I snipped from Twitter. I deliberately blotted out the name of the person I was conversing with: 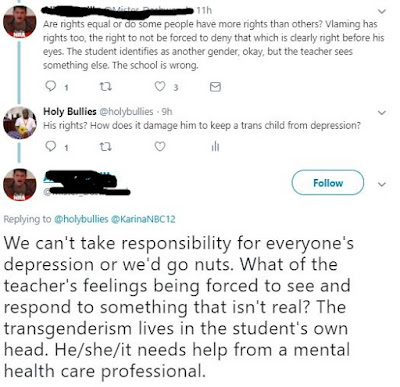 His comments were simply inaccurate and rude. I wouldn't blame anyone for succumbing to the temptation of cursing this man out. However, I took a higher road and simply blitzed him with some facts. Subsequently, he wouldn't converse any longer with me: 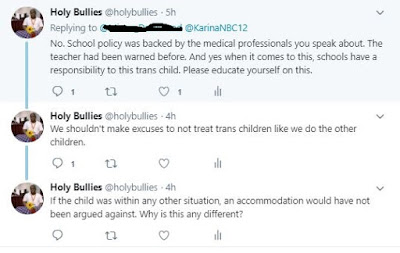 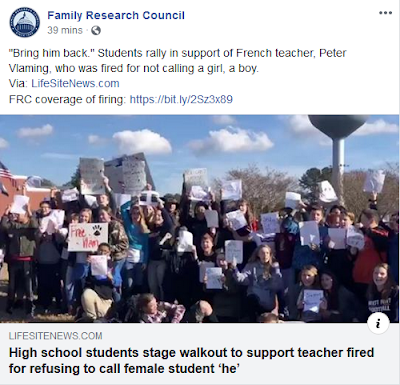 This is why I really despise the Family Research Council and other anti-LGBTQ groups.  The games they play to undermine the LGBTQ community are downright evil and our kids get caught in the middle of it. The tweets above prove this.

This situation involves Peter Vlaming, a Virginia teacher unanimously fired for not respecting a transgender student. However, thanks to FRC and the anti-LGBTQ conservative echo chamber, the teacher is being seen as a martyr by some, including the student protesting his firing.

1. The Family Research Council and anti-LGBTQ groups in general bully schools from educating about the transgender community, particularly transgender children. They generally exploit the fears and prejudices and parents.

2. These same groups deliberately back teachers and administrators who get caught into a situation of their own making by refusing to simply follow policy which serves to respect trans students. Such as Vlaming did. The anti-LGBTQ echo chamber strikes again by pumping the story up, portraying the person as  a victim and seizing the narrative, knowing fully well that it being a policy issue, schools cannot generally comment on the situation. If a right-wing legal agency, such as the Alliance Defending Freedom gets involve, the slanted media blitz becomes enormous. The trans child is ignored  or made to look like a predator or a pitied non-entity.

3. All right-wing groups have to do now is sit and an enjoy the intended results of Part 2 and, in this situation, the unintended results of Part 1. According to the article, the students who took part in this protest claimed that their intent is not to attack the trans student in question. However, they fail to realize that by defending Vlaming, they are in fact defending the action which led to his firing, i.e. the disrespect of the transgender student.


And there is another unfortunate result.