This is hilarious! The National Organization's Ruth Institute just told a lie on a Facebook group and guess what?

It's a group in which I am one of the moderators.

The Facebook group in question is called I bet this turkey can get more fans than NOM. It is a place where folks post articles and photos regarding the lgbtq community. Many times, the photos are comical views at the religious right and their nonsensical claims.

Imagine my surprise when I saw the following via Equality Matters: 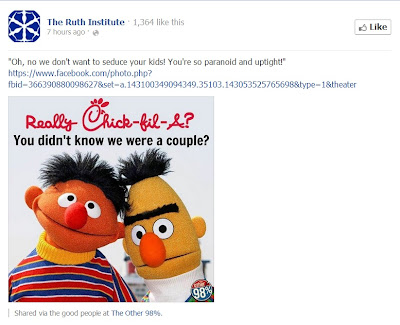 The photo was clearly created to poke fun at the controversy between Chick-Fil-A and Jim Henson's Muppets over comments made by the restaurant's owner in regards to the gay community.

But according to Equality Matters, the Ruth Institute seems to claim that this photo has a more sinister design:

In a July 25 Facebook post, the Ruth Institute linked to an image created by a pro-equality group in response to the recent controversy surrounding The Muppets and Chick-fil-A’s anti-gay politics. The image, which depicts Sesame Street’s Bert and Ernie as a same-sex couple, seemed to anger the Ruth Institute, which sarcastically added “Oh, no we don’t want to seduce your kids! You’re so paranoid and uptight!”

And it gets funnier:

This has to be one of the single most ridiculous things I have EVER read in my life.

Again, the Bert and Ernie graphic had NOTHING to do with any attempt to seduce children and anyone in their right mind would know this.

But then again we are talking about the National Organization for Marriage and its supporters, so those with common sense need not apply.

And please, no pictures of Popeye and Bluto

I cringe to think what we would be accused of next.

NOM’s Ruth Institute Peddles Conspiracy Theories About “Gay Agenda” - Who keeps telling the religious right our secret plans for overthrowing America and having Judy Garland's birthday declared a national holiday? Our secret fearless leaders (the one stroking his Persian cat) will be angry. Just who will he feed to the sharks due to the failure to keep our agenda secret?

Read: FRC's $35 million plan to 'go on the offense to advance the Christian worldview' - The Family Research Council wants $35 million to 'restore America.' Aw hell, I can do that for low, low price of $19.95.

One Million Moms Protests Gay-Themed Show It Hasn’t Even Seen Yet - Move along, folks. Crazy religious right group. Nothing to see here, except for the show they are protesting. It sounds promising.

Chick-Fil-A Recalling Jim Henson Kids' Meal Toys As Partnership Severed Over Anti-Gay Donations - I smell a rat on the part of Chick-Fil-A.

Conservative Media Attack The Muppets For Founding Company's Chick-Fil-A Rebuke - Keep it up. Don't be surprised if Miss Piggy karates you. I hear she is a black belt.

You simply have to hand it to the folks attempting to defend Mark Regnerus' flawed study on gay parenting.

Not necessarily for truth, mind you, but for chutzpah. Regardless of how many times the study has been called out for its faults, these folks continue to hang in there in their attempts to defend it.

But in doing so, they cause more criticism to rain down on it.

Christian Smith, professor of sociology and director of the Center for the Study of Religion and Society and the Center for Social Research at the University of Notre Dame, recently wrote a piece in The Chronicle of Higher Education defending Regnerus' work.

In the article, An Academic Auto-da-Fé, Smith claims that Regnerus and his work are being unjustly attacked by progressives:

Whoever said inquisitions and witch hunts were things of the past? A big one is going on now. The sociologist Mark Regnerus, at the University of Texas at Austin, is being smeared in the media and subjected to an inquiry by his university over allegations of scientific misconduct.

Regnerus's offense? His article in the July 2012 issue of Social Science Research reported that adult children of parents who had same-sex romantic relationships, including same-sex couples as parents, have more emotional and social problems than do adult children of heterosexual parents with intact marriages. That's it. Regnerus published ideologically unpopular research results on the contentious matter of same-sex relationships. And now he is being made to pay.

In today's political climate, and particularly in the discipline of sociology—dominated as it is by a progressive orthodoxy—what Regnerus did is unacceptable. It makes him a heretic, a traitor—and so he must be thrown under the bus.

. . . Regnerus has been attacked by sociologists all around the country, including some from his own department. He has been vilified by journalists who obviously (based on what they write) understand little about social-science research. And the journal in which Regnerus published his article has been the target of a pressure campaign.

It's an interesting piece with two flaws - one relatively minor and one which can be seen as major.

Read more »
Posted by BlackTsunami at 5:02 AM 5 comments: