If I have said it once, I have said it many times - sometimes it's best to give the religious right  a proper spotlight when they spout their homophobic nonsense because given enough time, they generally show just how nasty or clueless they are.

GLSEN (the Gay, Lesbian and Straight Education Network)'s No Name-Calling Week is designed to bring attention to the problem of bullying in America's schools and provide solutions to the problem.

American Family Association of Pennsylvania has a huge problem with this event.

It sent out the following action alert speaking against the event. However, the action alert was a huge failure in criticizing the event. What it does, however, is provide free publicity:


Back in 2004 the Gay Lesbian Straight Education Network (then under the watchful eye of Kevin Jennings – the guy who’s currently President Obama’s ‘Safe Schools Czar’) had an idea to reach into middle schools with the message that ‘gay is okay.’  Jennings had successfully infiltrated high schools for years through Gay Straight Alliance (GSA) clubs and the annual Day of Silence each April.  Using James Howe’s book The Misfits, about four friends who are teased about being overweight, being too tall, too smart and another about being ‘gay,’ as inspiration GLSEN introduced the nation’s middle schools to “No Name Calling Week.”  Mr. Howe is best known for his children’s books Bunnicula (and the series that followed) and Howliday Inn.  Before writing The Misfits and its sequel Totally Joe, Mr. Howe announced he was homosexual.  This announcement destroyed his family.


This week is GLSEN’s “No Name Calling Week” (NNCW).  It does sound benign, but a closer look reveals something else.  Here’s their list of partners, supporters and allies including Planned Parenthood, American-Arab Anti-Discrimination Committee, COLAGE (Children of Lesbian and Gays Everywhere), National Education Association and PFLAG (Parents, Families and Friends of Lesbians and Gays), but especially note the educational organizations that have partnered with GLSEN!

Click here for information on their lesson plans and, as you will see, NNCW has expanded beyond middle school to K-12.  Check the lessons plans and the amount of class time recommended for each lesson by clicking on the “More Info” box on the lesson plan pages.  Why are our tax dollars – we pay for the school day – being used for these lessons?  Click here for GLSEN’s homepage.   Check this website out thoroughly; you will see how well organized they are to get the message out to our kids that ‘gay is okay.’  Scroll clear to the bottom of their homepage for a list of their sponsors to see where they get some of their funding.

Okay, I think folks are supposed to be upset with this action alert. As to why, I don't know. The organization doesn't really say why No Name-Calling Week is a bad idea. But it does provide links for anyone wanting more material about the event.

However, where the American Family Association of Pennsylvania failed, our favorite anti-gay activist, Peter LaBarbera succeeds . . . then again, no he doesn't. 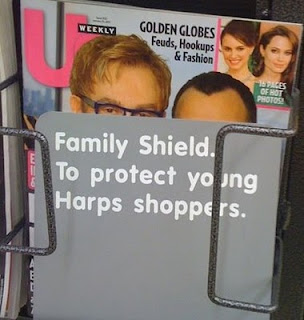 Grocery Store Finds Gay Parenting Magazine Cover Too Offensive For Kids - You gotta be #!@&!@ KIDDING ME!!!!This had BETTER be a hoax. Click on the link to complain directly to Harp's

House of Mercy Holds Ground, Gay Pastor Stands Up - A homeless shelter kicks out two women it suspects of being gay. What would Jesus do, indeed?

While certain members of the religious right consoled themselves during President Obama's mention of the DADT repeal last night by tweeting ugly messages, the American Family Association's One News Now seems to be taking a different offensive line of attack:

A member of the House Armed Services Committee believes the new Congress will hold hearings on the consequences that could result from repealing the ban on homosexual military service.

Many opponents of the repeal say the hearings should have taken place last year, before the bill was rammed through for political motives that could have serious consequences on troop morale and unit cohesion.

"My real view on this is one of privacy," he explains. "To me, persons who are serving in the military should respect each other's privacy."


Of course One News Now, in its attention to omitting details not suitable to the spin it's trying to push, ignores the fact that hearings did take place, including one where a certain phony military expert got her, shall we say, butt handed to her.

And then there was the survey released last year which revealed that the majority of the troops have no problem with gays serving openly in the military.

So this whine about the DADT repealed being "rammed through" is mere phraseology designed to obscure and obfusticate.

However should there be a hearing, I am curious as to whose expert testimony will be called.

Will it be Robert Knight of Coral Ridge Ministries who has spoken out against pro-lgbt legislation in front  Congress before. Will he cite the research of the discredited Paul Cameron this time?

Will it be Matt Barber of the Liberty Counsel, who waxed last night about soldiers being "felt up" in foxholes?

Or maybe Peter Sprigg or Tony Perkins of the anti-gay hate group, the Family Research Council. I'm sure their testimony about the lgbt community would be credible.