Far-right culture warrior Chris Rufo is mad at me.

Awwww! The so-called evil mastermind. Mr. BIG @NYTmag profile and so-called wrecker of #CRT and drag queens gets scared of a nondescript black gay guy from the south for simply making the argument that he is actually working FOR #LGBTQ people with his blatant public plotting. pic.twitter.com/rsVWpdD3li

I take it as a badge of honor. This man is partly behind the attempt to smear LGBTQ people as groomers and pedophiles. And he even encourages people to lie on us. 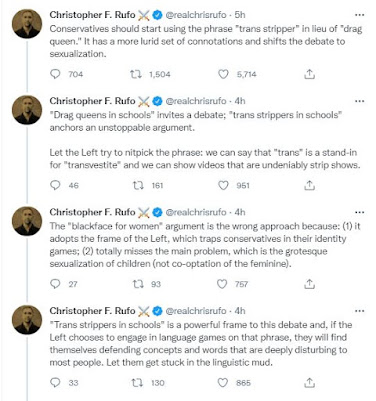 He didn't appreciate me mocking his wannabe James Bond villain need of publicly bragging about his homophobic plots. Like this one:

I guess Rufo didn't appreciate that his latest tweet proves the point I made about him in an earlier post:

Rufo's eagerness and unashamed openness in telling people to lie in order to cast LGBTQ people as groomers says more about his willingness to put us in danger than about him actually wanting to protect children from danger.