Was a SC police chief fired because she is lesbian? The proof is in the mayor's statements 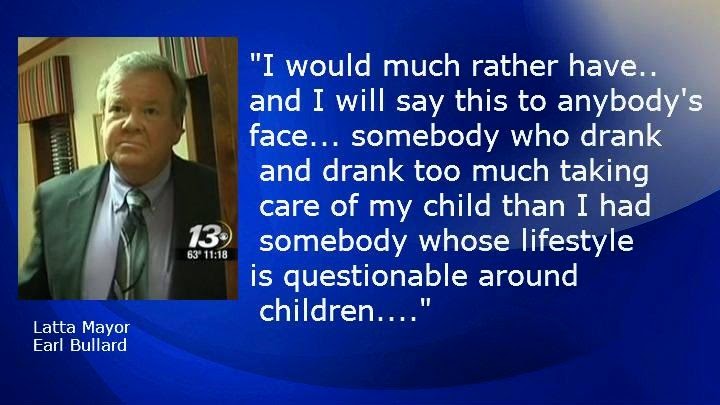 Batten down the hatches, folks. South Carolina is in the news again possibly over lgbt issues.

The Mayor of the Town Of Latta fired the town's Police Chief on Tuesday.

Latta town councilman Jared Taylor told us the mayor fired Crystal Moore because she received 7 reprimands. News13 was there as Moore, the first female chief of Latta, packed her belongings and left her office late Tuesday afternoon.


Moore has received a lot of support from residents. The mayor, Earl Bullard, on the other hand, has received much criticism. Several council members said that in firing Moore, he did not follow proper protocol. Some questioned why he gave Moore all seven reprimands in one day and one council member called several of them "questionable."

And others have said that Bullard fired Moore because she is openly gay. In fact, an audio of a phone conversation obtained by the network seems to give that argument lots of credibility. The mayor's comments are absolutely appalling:

"I would much rather have.. and I will say this to anybody's face... somebody who drank and drank too much taking care of my child than I had somebody whose lifestyle is questionable around children. Because that ain't the damn way it's supposed to be. You know.. you got people out there -- I'm telling you buddy -- I don't agree with some of the lifestyles that I see portrayed and I don't say anything because that is the way they want to live, but I am not going to let my child be around. " I'm not going to let 2 women stand up there and hold hands and let my child be aware of it. And I'm not going to see them do it with 2 men neither." I'm not going to do it. Because that ain't the way the world works. " Now, all these people showering down and saying 'Oh it's a different lifestyle they can have it.' Ok, fine and dandy, but I don't have to look at it and I don't want my child around it."


This situation is definitely not over as of yet. There will be a discussion of this issue Thursday at a town council meeting at 5:30 p.m.

UPDATE - According to Carolina Live, News Channel 15, Bullard refused to say why he had fired Moore, calling it a personnel matter. However, Moore has much support from residents of Latta. On Thursday,  some of her supporters will rally in support of her.

Meanwhile, according to Latta Councilman Jared Taylor, the council does not consider Moore fired. He said while the mayor can fire the police chief, it has to be approved by the council. And during its Thursday meeting, the council will vote on reinstating Moore.
Posted by BlackTsunami at 7:31 PM 25 comments: Links to this post

It really shouldn't be a shock to anyone whenever the American Family Association's Bryan Fischer lies and distorts in order to demonize the lgbt community and reduce us to the standard of his stereotypes. As demonstrated below, look what he does to Christianity, the religion he claims to follow:

Now a man came up to Jesus and asked, "Teacher, what good thing must I do to get eternal life?" "Why do you ask me about what is good?" Jesus replied. "There is only One who is good. If you want to enter life, obey the commandments." "Which ones?" the man inquired. Jesus replied, " 'Do not murder, do not commit adultery, do not steal, do not give false testimony, honor your father and mother,' and 'love your neighbor as yourself.' "All these I have kept," the young man said. "What do I still lack?" Jesus answered, "If you want to be perfect, go, sell your possessions and give to the poor, and you will have treasure in heaven. Then come, follow me." When the young man heard this, he went away sad, because he had great wealth. Then Jesus said to his disciples, "I tell you the truth, it is hard for a rich man to enter the kingdom of heaven. Again I tell you, it is easier for a camel to go through the eye of a needle than for a rich man to enter the kingdom of God."

Give some things time and they generally speak for themselves.
Posted by BlackTsunami at 3:21 PM No comments: Links to this post

Couple Plans Own Prom After Student Says School Barred Her From Bringing Her Transgender Boyfriend - And I just bet their prom will be much better. I'd go to it rather than the school's.

The Importance of Being Born Black and Gay - As you can tell, I have a personal bias when it comes to LOVING this piece.

Louisiana Lawmakers Refuse To Repeal State Law Banning Oral Sex - Oh come on guys! Why keep an antiquated law used to entrap gay men? Or have I answered my own question?

Judge stays most of Ohio gay marriage ruling - Be patient, folks. Victory will be ours, soon.

Anti-Gay Extremist Linda Harvey Says She Is Tired Of Talking About Gay Rights Issues - And by that, Harvey means she doesn't want any of us talking about lgbt rights issues. Sorry Linda dear, but prepare to become deliriously tired in the coming months.
Posted by BlackTsunami at 8:55 AM No comments: Links to this post

Look who is now our problem again:

American anti-gay activist Peter LaBarbera has reportedly decided to voluntarily leave Canada after he was arrested in Regina. LaBarbera, 51, was questioned by Canadian border officials Tuesday morning following his arrest on the University of Regina campus a day earlier.

A counter-protest was held by the UR Pride Centre, but interactions between the two camps were peaceful. Both LaBarbera and Whatcott have been released and are scheduled to appear in court on May 26. The pair were planning to speak on the University of Saskatchewan campus Tuesday, but according to Whatcott’s website, the event has been cancelled.

Its great to be back on USA soil. Even tho our freedoms are under siege by the Left, we are still freer thn most countries, inc Canada #tcot
— Peter LaBarbera (@PeterLaBarbera) April 15, 2014


Spent the night in a #Canadian jail cell b/c I spoke out against abortion and homosexuality--at a public university (U. Regina). #tcot #p2
— Peter LaBarbera (@PeterLaBarbera) April 15, 2014


Isn't LaBarbera precious when he lies? For the record, he was arrested for trespassing on a college campus. The University of Regina may be public but campus officials still can dictate which non-students can or can't come on campus.

But hey, who cares about truth when there is a story to exploit.