With the awful situation in Uganda with that country's president poised to sign the anti-gay persecution bill, (UPDATE - there are unconfirmed reports that he signed the bill) a reminder of how one of the proponents of the bill, Martin Ssempa, persuaded people to support this bill is in order. I should warn you that while the video below does not show graphic images, the lies coming from Ssempa's mouth are nauseating as he talks about gay men supposedly eating feces:


Ssempa was heavily involved in pushing this bill. However, it would seem that he had more than an evangelical notion of being an anti-gay crusader. According to certain accounts, Ssempa was using the bill and his notoriety of speaking out against lgbts to gain power and clout by attacking other pastors with accusations of homosexuality.

In 2012, he and five others ( Pastors Solomon Male, Michael Kyazze and Robert Kaira, Deborah Anita Kyomuhendo, and David Mukalazi) were found guilty of  a conspiracy to falsely accuse another pastor, Robert Kayanja of Rubaga Miracle Centre Cathedral, Kampala,  of having sexual relations with men in his congregation.

According to Box Turtle Bulletin:

The guilty verdict stemmed from a May 2009 incident in which Ssempa and the others engaged in a conspiracy to coerce a male church member at Robert Kayanja’s Rubaga Miracle Center Cathedral to claim that the parishioner had had sex with Kayanja. The six were sentenced to a fine of one million Shillings each (about US$390) and one hundred hours of community service.


It is also alleged that through various unscrupulous means, Ssempa and company were attempting to get other men to claim that Kayanja was sodomizing them.

AFA attacks Chevrolet for remembering that gay people have families, buy cars - And there, brothers and sisters, is the crux of anti-gay dishonesty. It's not enough for them to believe that we are base creatures unconcerned with things like love, morality, and family. They want to force others to push that belief.

NRO's Prager: Incest, Polygamy Are Logical Consequences Of Marriage Equality - Dennis Prager of the National Review, you are the one millionth conservative to connect marriage equality to incest and polygamy. Tell us what he wins, Bob. I would tell him but I've already got one fool falsely claiming that I issue vague, Jedi Mind type threats.

How A ‘Scientific Statement’ Convinced Uganda’s President To Sign The Anti-Homosexuality Bill - Just as I thought. That "scientific report' which convinced Uganda's president to sign the anti-gay persecution bill had NO scientific proof claimed that people are "taught" to be gay. Sounds like this mess was rigged from the beginning.

It's Time to End the Long History of Feminism Failing Transgender Women - An absolutely vile attack is being perpetrated on transgender women under everyone's noses by a surprising culprit. It's so sad. Just awful. 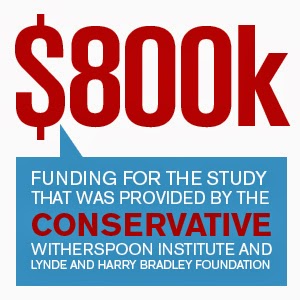 When it's all said and done, the discredited study by University of Texas professor Mark Regnerus will be seen as a pathetic last attempt by anti-gay groups to stop marriage equality via a nasty attack on same-sex families.

But for now, not many people - particularly in the lgbt community - know about this $800,00 flop or the effects it continues to have on the marriage equality fight. Nor are they aware that in spite of the fact that it has been discredited time and time again, anti-gay groups are determined to wring as much usage out of it as possible.

However, an excellent webpage gives you all you need to know.

I have to commend the Human Rights Campaign for The Regnerus Fallout, which looks at the junk science study, the players involved, how it has been discredited, and how anti-gay groups continue to misuse it, as well as an excellent timeline:


Posted by BlackTsunami at 5:04 AM No comments: